Jon and Ray invited me to tag along with them to do some Lakes Lanes ...

OK - let's see if I can get this right. I don''t know half the names, so apologies in advance. Also - I was trying to drive, watch the navigation on the PC MemoryMap to check my external GPS goody was working, watch the line Jon took, look at the scenery and take pics - consequently not everything was done every time

I'd wanted to do a Lakes trip for a while, and the weekend I had planned in August got stolen by work, so when Jon quietly said he'd be going, I managed to leach onto the trip!! Glad I did, because there is no way I would have known where to go, and some of it is probably not suitable for single-vehicle travel. I didn't even make it to the first night's campsite without having to be dragged out of a massive mud wallow Needless to say, Jon and Ray had no problems ... Sorry - can't figure out how to get the rotated image in here ... We stopped in a pleasant enough spot, and enjoyed the scenery. Unfortunately the intrepid travellers from the South had gotten held up in traffic, so by the time we sampled the great spaghetti bolognese it was about 22h30, and we were knackered.

The weather report for Kendal had said mostly sunny - unfortunately we were greeted with clouds and light drizzle for most of Saturday. which made clambering around the quarry a tad more interesting than it would have been otherwise. Nothing majorly challenging covered to this point, but stunning views all round.

Jon has posted a link to some quarry pics here are one or two more: Oooh - what's down there? Stupidly, none of us had taken a torch, and error we won't make again

Wasn't long before we were on the lanes again Then onto the Lake Windermere ferry The weather had started to clear up,but was mighty windy now, and we thought we were in for a storm, so we made camp and strung up a couple of tarpaulins for shelter Sunday dawned bright and sunny, and WARM and after a lazy start, despite being woken by a sheep right outside the tents (I think it was calling someone - NOT me!!) we were off on the trails again: One of the tight gates Kicking back and starting to relax now: Then the fun started - this is Stile End, I think? The LC goes in tomorrow for a new bumper installation ....

Not too bad, especially with an enthusiastic gate-man and spectator along: and the views were spectacular: We decided to have a late breakfast just before the start of the last lane, because that was just a pleasant drive over the hill ... Ray working at supervising the chef... We spent a pleasant hour or so here - fate was at work obviously, little did we know that the trail at the top and down the other side was almost completely broken up and washed away, and we'd (well, OK, I'd - although I did see Jon go a little pale at one bit...) have a few heart-stopping moments and do quite a bit of road-building And this is the last pic I have

It got too hairy from here on. Hopefully Anthony will have somoe more for us 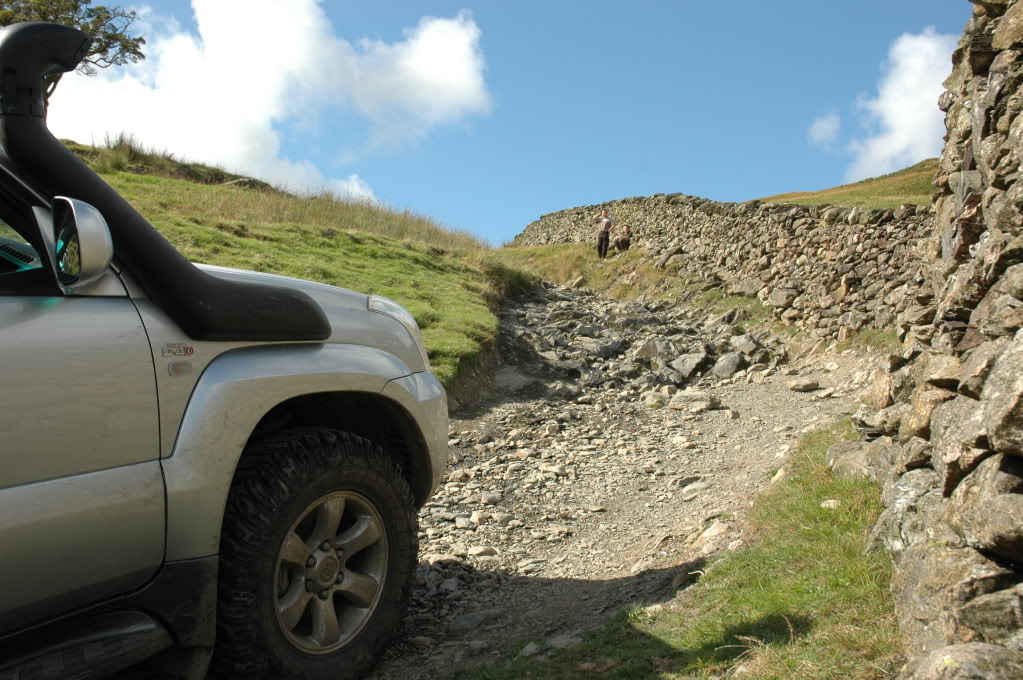 I did have a fantastic time, and many, many thanks to Ray and Jon, for the help, assistance and letting me join in their trip. I learnt a lot about the 120's abilities and that I'm not too bad a driver. I mapped it all out so I can go back one day (For those who don't know, Jon is a very small person. You should see him next to Chris

it does look a bit land of the giants doesn't it

Antony's (passenger) pictures of the trip are here: www.mudtoys.com/albums/2009-09-lakes-ant

Did you ever get to see any of the video?

I think there's a DVD here somewhere, maybe, seem to remember something about that

Great report. Thanks for sharing.

That interesting tyres on the 80, is that a combination of mud and road?

They're 36x12.5x16 Simex ET II's, very good for mud, bit noisey on road but behaviour is not too bad for such an aggressive tyre.
You must log in or register to reply here.

S
Wild camping: In the wrong place at the wrong time