Just a bit of a warning guys and somewhere worth a check.
Never came across this in all my years of LR ownership and did not expect it on a cruiser.

As the MOT is due, I decided to replace the two dodgy wheel studs as I have been driving round with just five wheel nuts and one of them cross threaded for the last seven months.
I took off the wheel and started to dismantle the hub when I spotted the crack below in the shocker mount.
Now I have to go get some welding done before the MOT.

Not the clearest of pictures, but believe me there is a 4 1/2 inch fracture there. 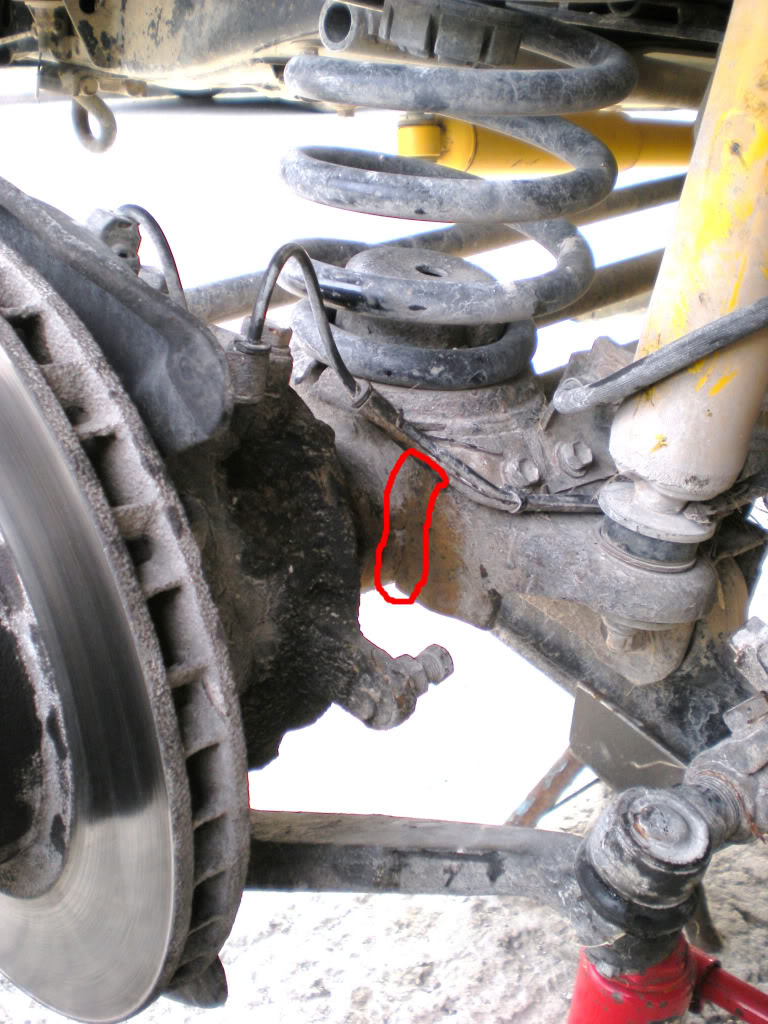 Well spotted! Wonder how that happened?

$hite, Les, that does not look good.

It's not too clear in the pic but can you describe better where the crack is? It looks like it MIGHT be the mounting bracket for the radius arm and shock... In which case, the SA cruiser forum has a big thread about 80s and 105s (with SFA) where the driver's side radius arm-to-axle mounting cracked. The conclusion was that caster correction bushes were causing the problem. There was also a school of thought that there was a small manufacturing defect on that mount where the welds weren't great, so the combination of indefferent weld plus extra stress from the caster correction bushes caused the cracking. Do you think yours might be the same, although on the near-side?
Thread from LCCSA below.

I don't know Andrew. As you know I had the CC last year with the OME lift so it could be connected.
I also drive like a t**t, especially on roundabouts and all the strain goes to that side.

It is a crack through a very poor looking weld and then carries on up the metal.
At the moment a decent welding repair is all that's needed but I'm glad I spotted it now as opposed to when it gives up the ghost.
There is no way of telling how old the crack is as it is full of rust, but with the weather and road salt, rust can form very quickly.

I have checked every other axle type mount and this seems to be the only one effected.
Don't like the adverts? Remove them by becoming a supporting member.   Click here

That's very close to the inner axle seal Les and for decent penetration on that you'll be putting quite a lot of heat into it ... I would strip it and do it properly but then I'm not the one with an MOT looming.

nothing to do with your problem but don't jack up or support your truck on the control arms, those bush's are not designed to have the weight of the truck on them like that and they (eventually) don't like the wicked twisting force it puts through them and come apart

Crap Les that's not nice at all... I feel you pain!

If I were welding that (and I'm not) I would weld it in stages. Fairly easy first pass to fill and then grind back and build up at the edges to bind into the middle and then a final pass down the centre line to knit together. The advantage of it being in a corner is that when you weld, you are not welding straight through the metal; you are welding alongside which effectively gives you a slightly thicker section to build up a fillet. But of course you can reinforce too. Trick with that is to not try to weld it in one pass. As Jon says - too much heat in one go.

It will weld up just fine I think.

Andrew Prince said:
I am kinda concerned if it is caused by CC bushes as I am about to install mine

I haven't read the thread you pointed out, but would be surprised that the castor correction bushes would cause the problem.

) will put a greater strain on the mount and cause the cracking.

Julian Voelcker said:
I haven't read the thread you pointed out, but would be surprised that the castor correction bushes would cause the problem.

) will put a greater strain on the mount and cause the cracking.
Click to expand...

Julian,
The SA guys were fairly adamant that the caster correction bushes were to blame - but as you point out, the trucks were doing some serious overland miles, carrying weight etc and simply pointing a finger at the CC bushes doesn't magically make them the cause! The fact that the CC bushes are made of harder polyurethane versus the OEM rubber bushes might also mean that shocks and vibration through the mounts etc are a bit more violent and accelerate any cracking?

Most of those guys seem to have switched back to OEM rubber bushes as a solution and have used some kind of "slot" modification to the mount to achieve the caster correction. (I haven't read up about the mod, so can't describe exactly what it is but I think it's mentioned in that link)

Les,
I had a good look around my front axle last night while wrestling with my steering damper and I don't see any cracks on mine. I will keep an eye on it once the new CC bushes are in and we can see if there is any change. I feel reassured by Julian's views and experience with CC bushes so I'll go ahead and be the guinea pig

Yes, you can weld plates onto the side of the trailing arm mounts and then slot the holes to twist the axle back into shape.

Aus, Vic, Between bay and Ocean.

The poorer quality the bush, the more stiff it is, the more chnace of craqcking the control arm mounts.

But they can crack with standard bushes too, if hammering the bump stops.

They also crack along the axle tube welds when doing the above.

I weld mine often

Julian Voelcker said:
[quote="Andrew Prince":1hpuowpe]I am kinda concerned if it is caused by CC bushes as I am about to install mine

I haven't read the thread you pointed out, but would be surprised that the castor correction bushes would cause the problem.

) will put a greater strain on the mount and cause the cracking.[/quote:1hpuowpe]

Thanks for that Julian. I think its probably more to do with my driving style than anything else.
I have a mate welding today and he has been welding for lots of years so I trust him completely to do the job right. MOT straight after so wish me luck folks.

good luck with the MOT mate....

will crawl under the truck after and have a look....
considering my driving is not to gentle...

By the way; Hi to Auto Craft and welcome to the forum.

I don't think a picture is worth while because he covered it in black underseal when he had done so you can't see the repair.

MOT passed with the usual play in the front wheel bearings, that makes seven MOTs with the same advisory