I actually have a Hiace but there seems to be so much 1kz-te expertise on this forum I thought perhaps someone may know the answer to a somewhat obscure question. 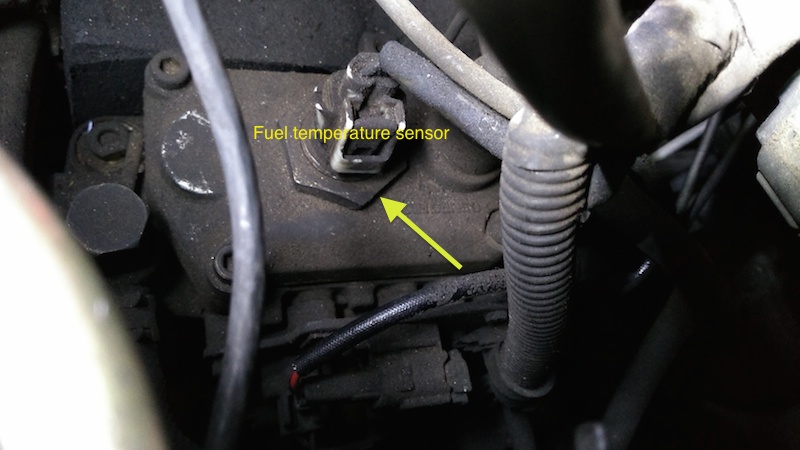 This is the grimy top of my injector pump, when I pressurise the fuel using the primer pump a ring of wet fuel appears around the nut holding in the sensor. The dirt suggests this may have been leaking for some time...

This (coupled with a small - but easily fixable leak on the primer pump) is I think responsible for my difficult starting and some power loss when warm (probably from air being drawn from the leaky primer pump than here).

1. Can this sensor be changed without having to take the cover of the pump off with those 4 allen bolts?
2. If not, can the cover be taken off without removing the pump?

I'm not really looking forward to taking the pump out TBH, any ideas or experience from people who have dismantled this pump? Many thanks in advance!

I have never seen this problem on the forum but Beau's vid gave me a better look at it and it seems the sensor just screws in so if you can get a spanner on it just unscrew it add some gasket seal and put it back in .

Thanks for the link, I think he's unscrewing a different sensor though.
Maybe it's not sensing the temperature, but it's the big sensor with the huge nut on it (arrowed on my original pic).
It's white in the video as that one is clean, with a large diameter shiny nut around it.

Yeah Beau who is a forum member removes the spill control valve which is the only thing that sometimes fails on these pumps and the heart of your fuelling system if you like , but it gives good indication of how the pumps are assembled and screw in sensors are widely used in any case . For me that would give me confidence enough to go ahead and unscrew the sensor .
Don't like the adverts?  Click here to remove them

If you do unscrew anything, give the area a really good clean, I mean operating theatre clean before removal as one grain of dirt will ruin your pump and injection system. Probably best to replace the seal, likely an O ring rather than use any sort of sealer for the same reason.

Good luck with it and let us know how you get on.

Cheers. Have cleaned up the top area with brake cleaner (it's silver again - yay!), tried tightening the 32mm ring-nut a fraction (was reasonably easy) but still leaking. When I take the ring-nut off the sensor is going to fall into the pump body (unless there is a weird bayonet system), I'm not sure if anything will be damaged when that happens and I don't think I'll be able to squeeze an O-ring in from the top.

So I think I'll have to get the insulation block out, clean all the way around the lid, take the drain pipes (injector overspill and tank return) off and pop the top off to get the lid free to fix the seal (probably a new O-ring like you say).

Not sure what makes the lid seal though - there's little benefit to stopping a small leak at the top to make a bigger one all around the lid - any ideas what the lid seal is, is it reusable or is there a place to get spares?

If anyone has a broken 1kz-te pump lying about could they take the lid off and report back?

Had a closer look at the various 1kz-te pump info on the internet etc and found this: 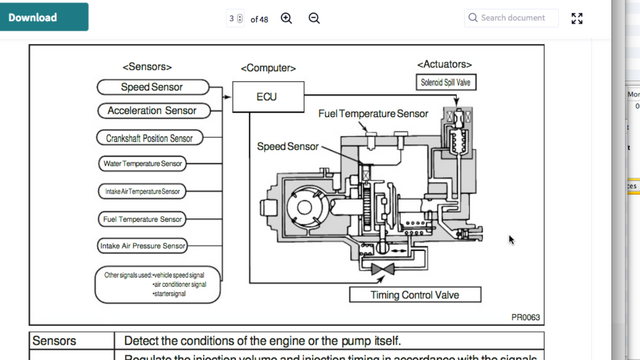 There's more info locked away by scribd (charging to view stuff they don't own) but that's all I could get free. It does show however that mine is a slightly older (1996) type with only the bit ring-nut sensor on top, which I now think is an engine speed sensor connection outlet, wired into a solenoid below in the pump body (The [X]s in the diagram are coils).

So looks like I have to undo it anyway to get the lid off, unless it's spring contact based. The alternate is to loosen it and try some thin plumbers PTFE tape to see if I can build up a seal against the sensor thread and the hole that can be clamped shut again by the ring-nut. That may be Plan A.

If I were you I’d mark the position of the sensor, remove the wire connector then undo the locknut. It’s probably just to lock the sensor which will almost certainly be a non contact magnetic pickup coil. I’m guessing it’s threaded and can be rotated to bring it closer to, or further away from the part it senses. Count the turns as you unscrew it. I don’t expect you would need to remove anything else. At a guess (and all this is not based on any experience of this pump BTW) I would expect to see an O ring in a groove in the sensor that has probably become worn. Replace it with a diesel (and veg oil) resistant O ring as it may have gone mushy with use of veg oil. Check the pump is scrupulously clean again and return the sensor back to its original position and nip the lock nut up reasonably tight.

Ok, think I fixed it with PTFE.

When the ring-nut of off it doesn't sink and it's located by an invisible key (i.e. under the lid) so it doesn't turn when the nut is tightened. So it's just a non-adjustable connector, probably with wires behind to the sensor as per the diagram.

I used around 2 feet off thin plumbers PTFE, the trick is to just back the ring-nut off by 2mm to guide the PTFE down to the surface (remember I'm accessing it from above).
Then I got the PTFE to the inside and got it right in there by holding the free end, making half a turn and then pulling it out a bit, then wound the rest in, tightened up the nut as sympathetically as I could (which now seems to be in the original position) and then pump like mad on the primer pump to get the pressure up to test for leaks.

So all fine now, I appear to have gotten away with this fix (at least for the moment!) and the engine still runs which I see as a bonus. 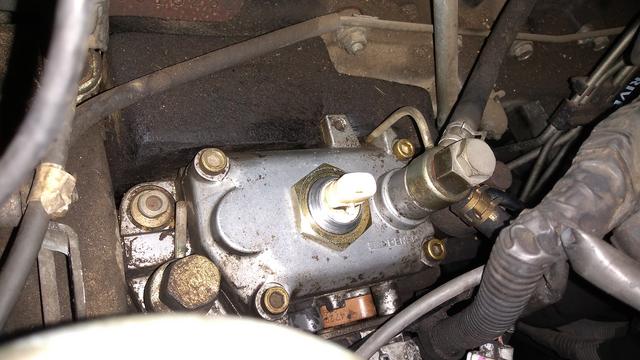 Nut off, suspended just in case with a clip wire: After: All dry after priming: yay! 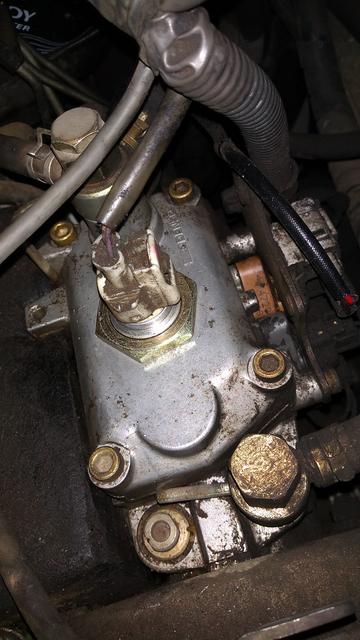 That blows my theory clean out the water then.

Well done with the fix.
You know you mentioned taking the lid off to access the underside…you could be on to something there.

Haha - but I suspect there IS an O-ring underneath that presses against the lid.

Taking the lid off is I think possible but I'd be wanting the correct (and like you say - fuel resistant!) lid gasket and sensor O-ring/gasket to hand to do it, and of course the risk of contamination goes up.

I suspect to take the lid off you have to undo the sensor anyway and that's why they did it that way, it will be soldered to the sensor coil inside so pulling the lid with the speed sensor still bolted onto it may rip the wires off.

Maybe one day someone will take an old one to bits, but they are getting rarer these days as it's all gone common rail. My next van/car will probably be petrol LOL, ideally a hybrid with LPG.

BTW I would have stuffed an O-ring into that gap you can see, I have a box of them and was tempted, but I didn't want the diesel to eat it and turn it into a ring of sludge I'd then have to clean out one day LOL.

Yes I think it all depends on the exact type of rubber, I always use plumbers silicone grease to fit suspension bushes (washing up liquid has salt in it and encourages water but silicon grease drives water away) as they reckon the mineral grease attacks it. Can't recall who 'they' were though LOL.

I looked on my super-cheap-chinese O-ring box but it didn't say what they were made from .

Not sure what's been through my van - I think only premium Japanese diesel, the exhaust didn't even smell of diesel when the Japanese stuff was burning - not sure how they do that. I guess the previous owner, Mr NeverServiceAnythingEver-san didn't think of veggie oil LOL.

That confirms what my one functioning brain cell had lurking in the drawer marked ‘useful information’ that Buna N or Nitrile are resistant to veg oil. Yes, silicone grease is excellent for O rings. I look after a couple of vacuum furnaces and the (massive) O rings used on them get coated with silicone grease.

I’d hope the injection pump didn’t get much more than hand hot really. Viton would certainly be a safe bet.

Glad you managed to fix it, and you got lucky with the sensor not falling inside.

Starcruiser, you are correct that there is a simple o-ring that is sealed against the backside inside the pump. You can remove the top of the casing and replace the seal if needed. The sensor on top is a RPM sensor, it actually feeds back to the ECU and then your tach. It has wires than runs to a small magnetic looking sensor that sits directly on top a gearwheel. That itself can be disconnected as it's held in with two bolts.

I can’t take the credit for that one Beau, GP had it spot on earlier on. I guessed (wrong) that it would screw in and be tightened with the locknut. I didn’t believe it could just be the connector. Every day’s a school day
M

Thanks for that info. I have exactly the same leak problem with my pump.
You must log in or register to reply here.