Different wheels on the front and back

To be fair to you Sid as a new member to this forum you've put up with a fair amount of ridicule and remained civil in your responses. Perhaps some of us need reminding that what we give is advice not orders.

Sid said:
advancing our understanding of the world requires questioning what has gone before. the world was flat - it was questioned. the laws of physics become theories when disproven. never to be complacent and drive to improve it what I believe in. to me this means widening our understanding. I've had some good points mentioned. thanks for those.
Click to expand...

Good point.Your'e at the right place for all things Landcruiser regardless of your personal choices .How about posting on the introduce yourself thread , with some pics of your Landcruiser ?

TONYCY11 said:
I have re-framed from commenting on here lately , but I found I can not stop my self from saying this , you must be Asian because when I lived in the UK in west yorkshire Asians were massive in numbers and only they the drug dealer and Pimp type used to put bigger wheels and even larger tires at the back on SUVs , you do better to own a typical Asian SUV like BMW X5 , Audi Q7 , Range Rover sport or Porsche suv , the Landcruiser is for the sensible person and not someone addicted to bling and pose as or look like a drug dealer or pimp the two favorite trades that younger Asian men aspire to be . This is probably my last post on here .
Click to expand...

Well when I was growing up Asian in Yorkshire, we all tended to aspire to be Doctors, as our parents had encouraged us to be for the accolade and the bragging rights.
I wanted to join the RAF as a pilot and “aced” the entrance tests but sadly and in this case somewhat ironically I was found to be colourblind ( Damn you Shinobu Ishihara).
so I did an engineering apprenticeship instead and stumbled into banking and then somehow following the crash ended up in oil exploration.
still I’m just grateful we all managed to avoid the “Favourite trades” otherwise my family wouldn’t have in its ranks .. A medical Doctor, A police officer , a paediatric intensive care nurse, a cardiac resuscitation specialist (ex paramedic and aspiring Doctor ), a radiographer, a customs officer, a solicitor, 2 teachers and a management consultant in the city amongst its numbers.
I think my functionally illiterate steelworker Father was pretty proud of us all and didn’t get so see how his constant encouragement and support saw all of his children attend university and all of his grandchildren so far too.
It’s all changed now of course though.
We’re all encouraging our children away from Medicine (It’s such a cliche) Now it’s Chancellor of the exchequer, Home Secretary, Minister for vaccines that sort of thing , if only we could get them to stop that infernal drug dealing they seem to adore .

Oh and on the big wheel little wheel thing.
Sid .. don’t do it. It’ll look crap. Only really suits low riders and bugs.

and the forum would be better for it...
G

Not sure but has the 120 a viscous coupling in the centre diff ? if so remove that and as you say it will be working harder than the designer may have conceived but should work .... don't understand how a non viscous diff could be torque proportional and send more to the rears than the front ?
Last edited by a moderator: Apr 19, 2021

The arches of a 120 seem less forgiving and it took about a 4" lift , a big negative offset and some precision violence with a hammer and grinder to make those fit my 90 . The 120 does need bigger wheels and everything is possible if your determined enough but it seems very probable to me that you will have to modify bodywork .
Don't like the adverts?  Click here to remove them
K

Rosy said:
and the forum would be better for it...
Click to expand...

TonyC has contributed a lot of amazing information to this forum, for which I am very grateful.

karl2000 said:
TonyC has contributed a lot of amazing information to this forum, for which I am very grateful.
Click to expand...

I don’t care if he was a founding member of this forum who has made more posts than Wikipedia or gained more like than a Kardashian, there is no a justification for a comment like that.

There are plenty of page here with some proper hot-tempered debate (see the Brexit page) but even when it got a bit “handbags at dawn” I don’t recall seeing a single post that brought the race of a contributor into it.

I think some folks here forget this is an international forum, not the table at the back of your local where a bit of tasteless humour after a few jars gets a few laughs and more importantly, will go unchallenged, not while I’m a member at least.

@TONYCY11 , you know what you did, you took the time to think about and write out that ugly message to a new member you know nothing about other than he/she has some bizarre desire to turn a truck into a beach buggy. I’d rather you did the right thing and apologies to Sid so we can all go back to the talking about trucks but if you chose to go or a moderator throws you out, well, I won’t miss you.
K

Whatever mate, I'm here for Cruisers not arguments.

Personally I respect everyone from every background - simple as that.

Beau did something different and cool , again a 90 series but the principal and how it was done remains the same as us mudpluggers employ . 120's with 33" wide tyres are few and far between but if you can find someone who fitted the biggest tyres he could you can do your own version of the same because only the overall diameter matters , how much is wheel and how much is tyre really makes no difference . 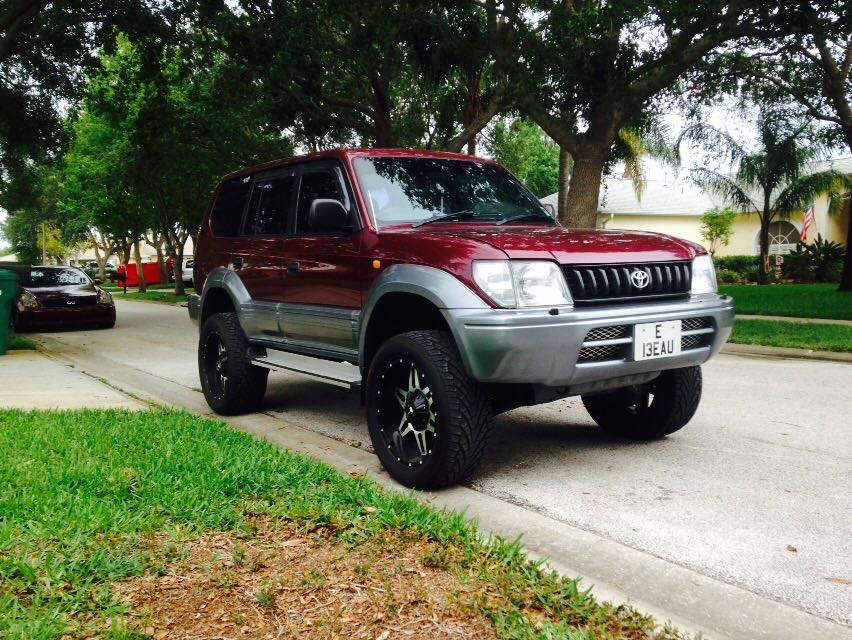 The central diff is not fully open, this is a Torsen LSD diff, furthermore even with a fully open diff, this is only designed to deal with curves and this also not permanently... if you put different wheel size the diff will work constantly and probably worn out sooner than expected... So, you can try it but it is not good idea...
P

uHu said:
Different wheel sizes of this magnitude would give you problems with atrac and abs, and the centre diff would not enjoy working overtime.
If you were to engage CDL, you would not be able to disengage it at all, without some advanced acrobatic moves on a loose surface.

If the Jeep spends most of its time on the road, why don't you keep the Cruiser for more suitable work.

This is a good point, the ABS computer would think there is a constant slippage and I do not know how the stabilisation function will react?
P

There is a difference if the diff bearings are operating at slow speed while cornering or higher speed when having different wheel size... that is why e.g. when you have an undersized spare wheel on a normal car, there is a limit on speed (80 km/h) and also recommended limited distance... I think in the diff there are not ball bearings only friction bearings which are not supplied by oil under pressure so it means there could be not enough oil when a speed difference is higher and prolonged...ending up with sizing of bearings...

Im assuming the torsen LSD is a gear 1.5 type rather than a coupling?
You must log in or register to reply here.