Engine bay looks about par, similar to mine, although wonder why he needs a bit of wood to keep the ns battery in place.

Injectors, about £600 if you do them yourself with refurb injectors. About £1k with a good indi, cost you a kidney and spleen at Toyota... They will need doing around 130k miles, and you should also the the SCV on the injector pump, they about £200 from rough tracks

Did this model have the seized brakes issue on the front callipers? Each fix and not too costly if DIY (I have a seal kit I shall never use if you wanted it!) but could be bargaining tool to get it price down a bit.

Lol, they all have that issue... Crap Toyota design.

Another odd thing. The above is advertised as an LC3. But with leather seats [which I understand only came with the LC4 and LC5]. There's certainly something a bit strange looking about them. They don't match the rest of the interior and look kinda lumpy in places, like they're just seat covers... 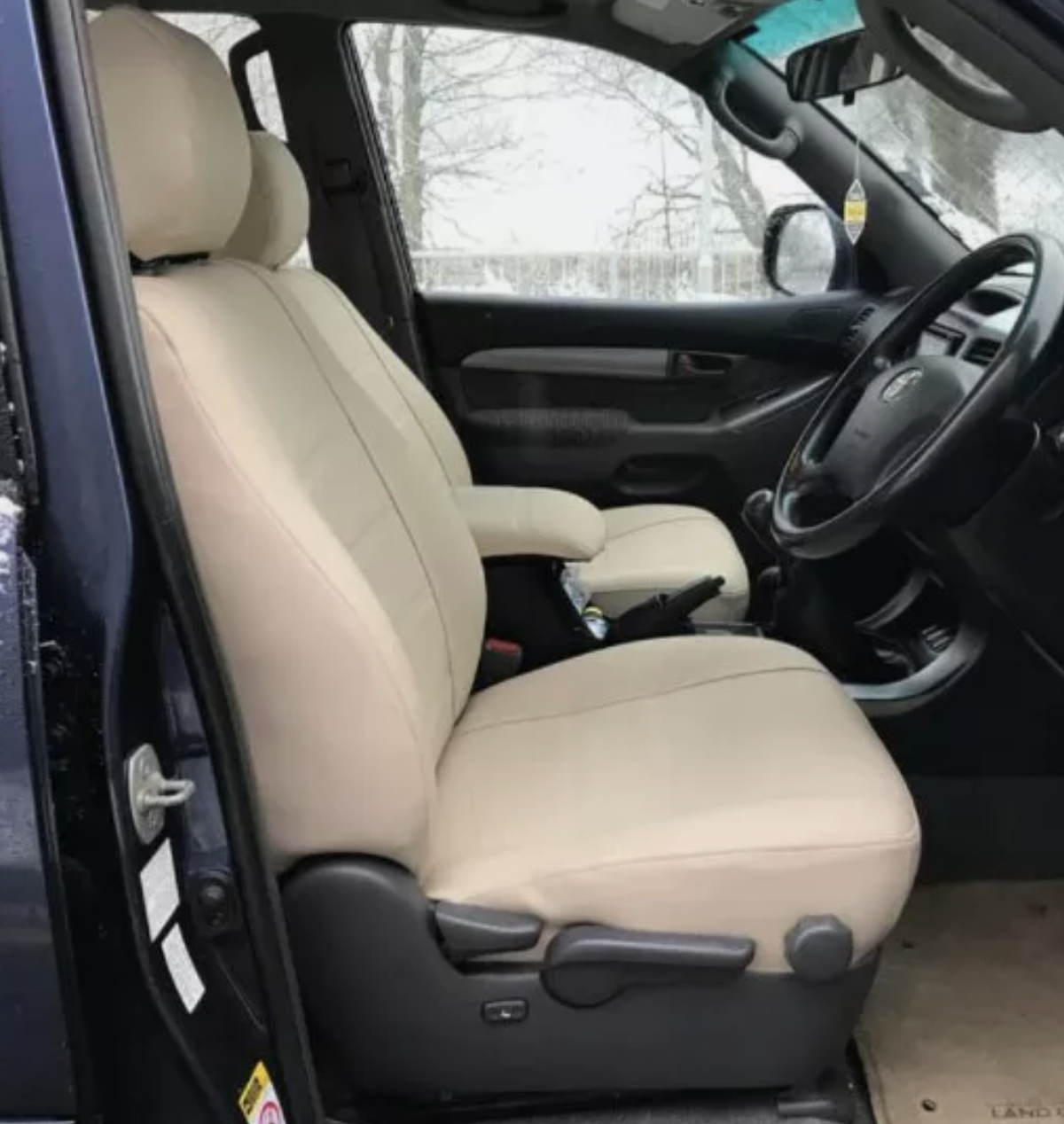 Also, the dash looks wrong for an LC3.. Should it have the fancy digitronic screen? I thought that was only in the higher spec models too?

[Apologies for the crappy lo-res pics. On my prehistoric tablet at the mo'] 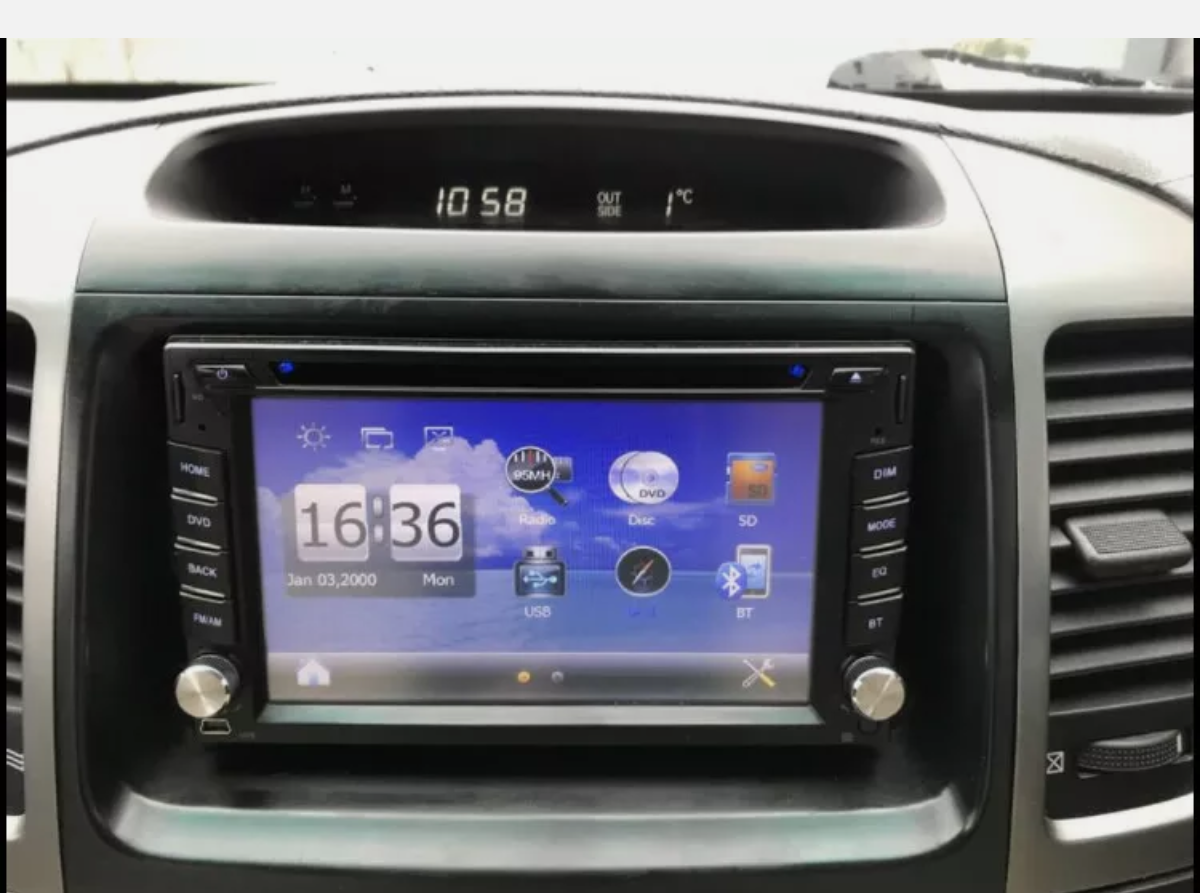 LC4 does not have the fancy stuff either. Was just the 5.
Those seats look recovered. I would have through they would have had cream plastic surrounds.
Still, if the quality feels and looks ok, nothing wrong with it. Some 120 leather would be looking tired by now anyway.

Seats look like they have either been recovered or have a cover.

The radio is aftermarket, easy enough to retrofit.
Don't like the adverts?  Click here to remove them

TonyP said:
Lol, they all have that issue... Crap Toyota design.

I have a refurbed set of calipers on the shelf waiting for the next winter
Click to expand...

Yeah, had me wondering too. I had that problem literally a few days after getting my 120. Mr T kindly put in a new set of calipers, discs and pads and sent me an eye watering bill. Since then I have acquired a couple of the DIY kits for just in case

Meanwhile, back in the 'detached from reality' world of vehicle advertising, I spotted this gem today: 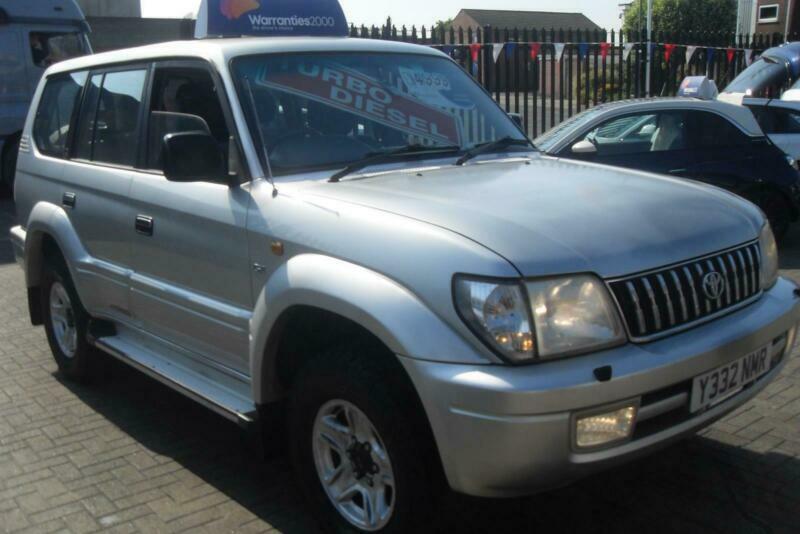 Are you ready for this? If there's a world record for the most advisories on one MOT, I think we have a winner....

If that's excellent condition, I'd hate to see one of the seller's 'average condition for age' ones.

In my opinion id probably ignore just about everyone of them advisories. The tyres you'll probably change anyway along with the springs that are 'corroded' what spring isn't at 20 year old. If the person testing is only used to seeing nearly new cars, looking under a 20 year old cruiser is totally different. They'll see surface rust and think it's beyond repair

That list of advisories..... The owner has had an argument or some sort of a family feud with the tester for that.

Nah its jealousy because the tester knows it will outlast his car by 20 years at least .

Must have taken longer to write out the advisories than to do the actual test.


Josh Tagg said:
In my opinion id probably ignore just about everyone of them advisories....
Click to expand...

Yeah. To be fair, a lot of them are extremely pedantic "slight corrosion to [brake pipe] ferrule" for example. But I just found it amusing to read "Excellent condition. First to see will buy" and then be confronted by that wall of advisories when I went to check the MOT history.

On a more general note, what makes me dubious about so many of the sellers' descriptions is that the vast majority of them don't mention anything about the MOT history at all, even if it's been flagging stuff up. The odd one or two will say something like "Since MOT I have <insert list of advisory related jobs done>" but most of them just completely ignore it and instead wax lyrical about really unimportant things like what colour the seats are or what brand of stereo has been fitted. I suppose their target market is people who would buy a car based on that and never look underneath or inside the bonnet.

When I sold my last van, I practically wrote a novel about it; outlining the jobs I'd done, what parts I'd used, the good and bad features and I listed all the known faults. A couple of the people who came to see it actually said it was better than they had expected from my description. Marketing 101 folks: "Under-promise and Over-deliver"!

BTW: Is it just my imagination, or are asking prices slowly starting to come back down to Earth again a wee bit, of late? I'm seeing more Cruisers around the 3 - 4 grand mark again. For a while there it seemed everyone was asking 5 - 6 -7 grand for anything with a Land Cruiser badge on the back.
Last edited: Jun 3, 2021

OK, my beady eyed chums. Here's tonight's offering. Anything to say about this lot? It's a 2000 Collie auto, with 212.000 miles [seller said km, but it's not a Prado, so I assume it's miles]. Seller is looking for £3700. MOT history is pretty clean. Axle looks pretty crusty to me. But I've only seen a few, so not much to compare it with.

On those pics alone thats an honest truck at an honest price . Thats not rust thats missing paint , its no better nor worse than all the other 90's i've seen in your threads . They are 20+ years old so all of them will require very similar work to ensure they last another 20 years .

Second that to what Shaynes said. Best underside I’ve seen to late. A wire brush and some treatment will look good as new.

From my experience looking at Collies that one doesn't seem too bad. Where some of these dealers get their prices from I don't know. Talking to a lad from Bradistan who deals in the like and lives in the real world it seems that £3K is a damn good price to achieve for a Collie.

By the way Josh, I'm aiming to get my V6 back, do you reckon its any good?
J

That last but one pic, axle rust doesn't look too bad nor the chassis, more of concern is the rust on the thin inner sill visible through the front side step bracket, they can perforate.
The price is a tad optimistic, bearing in mind it needs the best part of a week's work dealing with the existing rust alone, even if you diy the proofing don't expect much change from £200 in products alone. 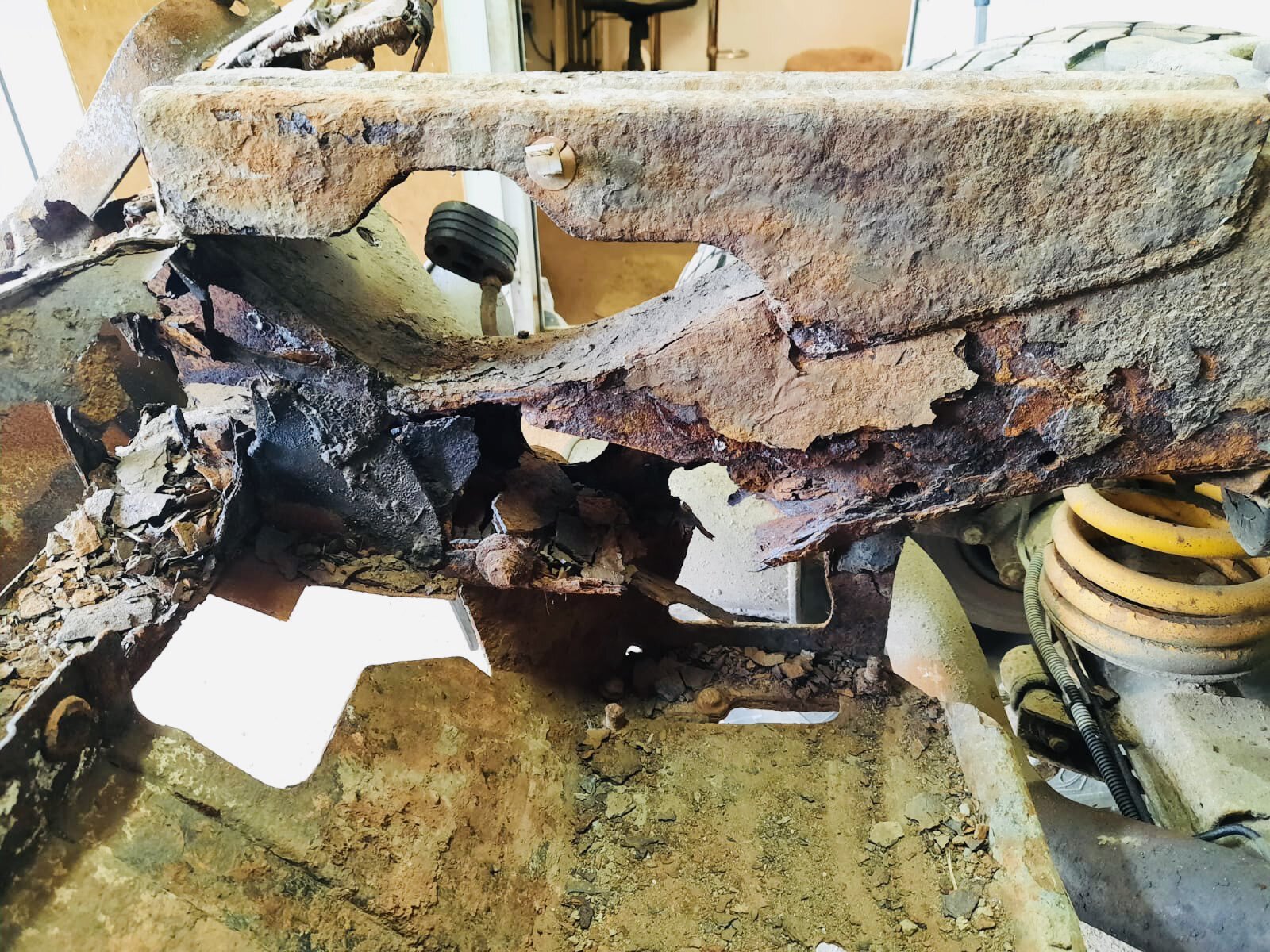 Well, folks. In case you've not noticed my thread in the 90 Series forum, I have finally, after much wailing, gnashing of teeth, rending of raiment, etc. finally managed to score a Land Cruiser. So thanks all for keeping an eye out for me and chipping in with your opinions on the various trucks I was interested in. The search is now officially called off.

I couldn't have done it without yous!

Got One at Last!

Hurrah! --well folks, I've finally taken the plunge. After polluting your forum for the past month and a bit with my increasingly futile quest, I finally pulled the trigger today on that one I mentioned in one of my many other threads...

www.landcruiserclub.net
Last edited: Jun 4, 2021
You must log in or register to reply here.

Headlamps and Grille Botched Together. How Should This All Fit?
2