Its been moving around town most of the time,(this issue came up once earlier though it didnt cross my mind much as it happened on a shorter trip). Now however had a long trip on the highway and encountered the following issues which i need some help with:

1) Cruising at approx 70mph going over a few hills the check engine light would come on, car would loose power and not accelerate.
This accompanied with billowing black smoke out the exhaust. On the flats it would not go above 60 mph with accelerator all the way down.
Interestingly however, the cruise control stick allowed for speed increase /decrease as per normal and was able to take it to 70 mph plus using the cruise stick.
Would shut the car down , and the error would clear up, only to return again after 15-20 odd minutes.
On the flats , the check engine light remained off though smoke did come back in scary looking clouds whenever i gave it some push and went over 70 - 75 mph. However as soon as the steep ascents arrived, so did the check engine light with an instant retard in power. On closer observation it seemed like the engine did not like hitting 2600 rpm (redline at 4K) on a constant basis.
Nursed it home , and since them its been driving like a champ in town. Pulled the code on techstream(attaching the screenshot)
Error code is 58(2)
Seems like a SCV related error. Read on the forum that cleaning the MAF might help, did the same though havent had a chance to take it for a long run again (and am kinda weary of doing that without sorting the issue)
So looking at the screenshot, does any1 have any further insight. Do these SCVs go bad? The vehicle has around 115K miles on it 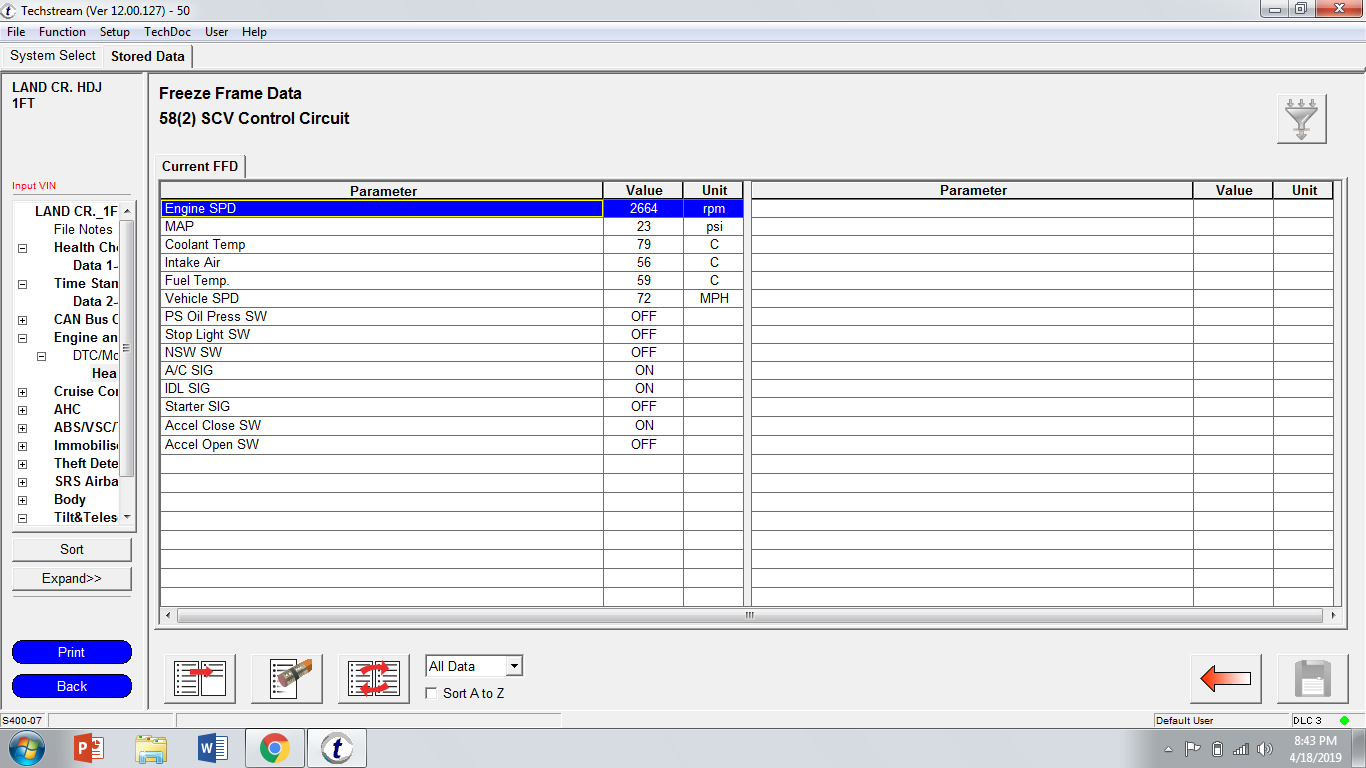 
One thing also to not is that the intake air temp mostly is 20-25 degree Celsius higher than ambient temp, is that normal?
Have some oil leaking from the turbo to intercooler , but i dont think that should be causing higher temps....
Did an EGR delete a few days before this trip

2) The car starts vibrating at 60mph plus, seems like coming from the rear, and gives MAJOR vibrations taking left turns when the right tire is loaded. Have changes over the wheel and its jst the same if not worst, so not the rim/tire. What could i be looking at here. Might be getting it looked at tomorrow but would like some thoughts beforehand maybe.

Did you get anywhere with your issue?
I just checked my intake air temp data, and it's 5 C over ambient, so yours is a bit high.
I see on your freeze frame data that the IDL SIG is on -- doesn't that mean that the accelerator is in the idle position? I've heard about fault in the idle switch on the accelerator pedal, either mechanical or electrical. Maybe the fix is that easy.
Otherwise, it could be that if you have EGR, the intake manifold, egr valve, etc, are blocked up by carbon. It's especially common on cars that go at low speed most of the time. Have a look here: https://www.landcruiserclub.net/community/threads/1hd-fte-egr-removal.135525/

Other possibilities are: Diesel filter (have to use original, specified for the hdj100), fuel filter in the tank, turbo, turbo pressure sensor, accelerator position sensor, clogged particulate filter (is known to show up as a turbo (or intake air volume) problem).
Last edited: Jun 25, 2019
You must log in or register to reply here.
Share:
Facebook Reddit Pinterest Tumblr WhatsApp Email Link
Top Bottom
✖
AdBlock Detected