Well we've tried several caravans, a trailer tent, a roof tent and next to try would be a recently purchased Oz tent for our holidays but so far we haven't found our ideal set up. So my next idea is to combine a desire to build a trailer with our holiday needs and the collection of gear we've got and build my own take on a trailer tent

So far I have an indispension type 1300Kg axle with braked hubs with a 5x150 stud pattern which arrived today and lots of ideas! 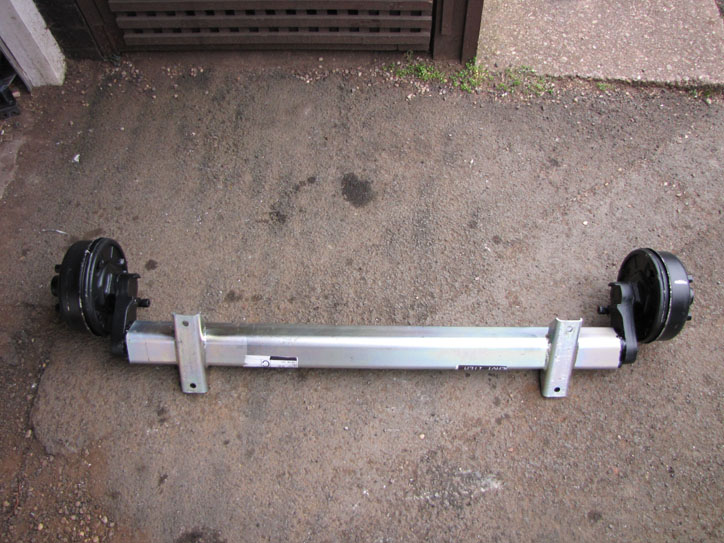 I have enough wheels and tyres for it to run the same as my 100 (18" OEM alloys with 285x75x18 Toyo Open Country AT's) so the trailer will have good ground clearance and run at a similar height to the tow vehicle. Rather than a fancy hitch that has lots of DOF I will use an ordinary ball hitch but a bolt on unit so it could be changed.

My idea is to make the top deck area 2400mm long by 1500mm wide (or maybe a bit wider) so it can carry our (wide) Maggiolina RT slightly offset to one side with the Fox wing awning mounted down the other side. When open the top of the Maggiolina needs to be about 1900mm high because the plan is to stand our Oz tent RV4 (with delux front ) against the side of the trailer so the Oz tent gives the living space and the Maggiolina a nice bed! The Fox wing would be raised up on poles to match and give some extra covered living space. The main idea is to have a suitable trailer to mount all these on but still be able to stick them on the 100 for solo trips.

Phase 1 will just be to build the platform for those things to be mounted on and towed. If that works out and seems like we might use it then I'll get into water tanks, gas, heaters, slide out kitchens etc but for now I need to keep it simple for there to be any hope of finishing it any time soon!

Don't expect any imediate updates because I'm in the middle of some other projects at the moment!

Certainly a project I would like to see happen

Do you think that axle will last? Would that suspension take a prolonged beating without failing? Wouldn't leaf spring suspension be a better option.

Or can you / do you mount the leaves on the axle and then the body?

I started one before my big move and was still in my LR days so it is now abandoned.
Might sell it if anyone is interested, it has a full braked Bradley 2 tonne axle (not connected) I though about building my own suspension, either leaf sprung or trailing arm on coils, both with 100 series front hubs running on custom stub axles but I decided as I don't even know if this trailer will get used more than once it makes no sense to spend so much time and affort when there is a simpler solution. The axle I have is bolt on so if the life expectancy of this trailer project starts looking long term then I can revisit the axle and suspension set up but these type of axles are used on commercial rigs by builders, car haulers etc day in day out and they take the abuse so they should stand up to our camping trip(s)

Anyway I am still on the lookout for the body to fit to my sankey trailer.

Are you looking for a sankey body or a land cruiser to use as a body?
Don't like the adverts?  Click here to remove them

I'm sure you've all though of this, but the main area where camper trailers / offroad trailers seem to break when not thought through properly is where the A-frame bit meets the rest of the chassis, and the axles when not using 2.5 ton braked axles and leaf springs! This is still cool though Paul said:
Are you looking for a sankey body or a land cruiser to use as a body?
Click to expand...

I am looking for a LR 110 Hi-cap rear body and then a Truckman top. I know of the compleat set up, but it is in France!!

Gary Stockton said:
I'm sure you've all though of this, but the main area where camper trailers / offroad trailers seem to break when not thought through properly is where the A-frame bit meets the rest of the chassis, and the axles when not using 2.5 ton braked axles and leaf springs! 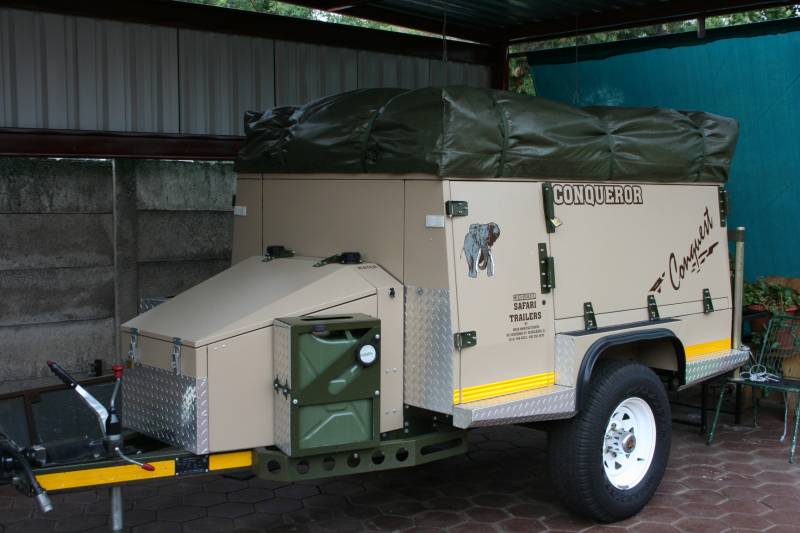 This is still cool though

Mine will be a bit of both, no roof tent and I will be able to sleep inside on mine.

Craddocks have a load of bodies in their yard

Do check out what Paul @ MyWay UK is doing, he has developed a kit to bolt onto Sankeys - see http://www.mywayrooftents.co.uk/voyager_trailer.html

I'd already seen the myway conversion on the net but I had a quick look at the one they had at the show on Sunday as well. None of them are what I'm after really. Got any links for Conqueror blurb?

Just look at some of this kit
http://www.adventuretrailers.com/index.html

All very nice bits of engineering but I have a pretty good idea in my head what I am after / will build and none of the commercial solutions are it. I'm a bit unconventional sometimes though

Have you had a good look at suspension design? one of the most impressive setups for me, is the air bag system that adventure trailers use- its a combine damper/absorber unit that is height adjustable.

Sure you've thought about it already but have you considered the following:
Track Width (to match the LC)
Grund Clearance and angles- there's no point having masssive clearance and angles if all you're doing is driving arund feilds (not that i think you will be, but you get the point!)
Tongue length to allow you to jacknife the Unit
CofG
Rotatibilty of the coupling- you really don't want a trailer unit to destabilise of even flip the car!
Power supply from the vehicle- does it have to run trailer born batteries?
Wheel types- to match the LC- no point having to carry 2 different wheels and tyres
Method of levelling- if you are going to put a tent on the trailer, how are you going to ensure that the trailer is level? you can't sleep on a slope very comfortably- one US trailer setup uses a pair of demountably Hi-lifts that you can stabilise the trailer with whcih seems like a good idea.
Security and safety- do you need to worry about things like sharp edges, heavy doors that can trap small fingers, lids without gas struts etc etc. Is the trailer braked so yo are safe at high speed- is therer off camber stability- and perhaps most importantly whats the level of theft protection?
How long does the trailer have to support you for? just basic extra cargo space, or a full n expedition trailer with kitchen, water storage, fuel storage, shelter etc
Total weight of the trailer is key as well- youdon't want to be towing 3 tonnes through the dunes after all! but there's no point in having a trailer if you have to put most of your kit in the vehicle to spread weight (although you will have to do that to some extent anyway.

have you got the overland Journal report on trailers- it has loads of useful information in it- can upload if you want to see what they say.

I did look at the suspension design quite a lot as it would be an interesting project but I decided I was in danger of never having time to build the rest of the trailer so I have made some compromises. As it will be the first trailer I've built there will be things about it I want to change so there's a good chance this is just a prototype. I've been down this road with software development and you can so easily get bogged down in making it perfect that you never get far enough to use the thing! It's just an ordinary camping trailer with some adventure trailer features, not a full on adventure trailer which might be what comes after this one

I don't have the OJ trailer write up, I probably haven't been a subscriber long enough, so a look at that will be useful thanks.

Some progress for an old idea! I need to haul some heavy items and on Sunday decided rather than being sensible and borrowing a trailer I'd get on with making my own. I had quite a bit of steel gathering dust so I decided to use what I've got rather than buying in a load more slightly lighter weight material

Spent sunday afternoon cutting and welding a frame together which is a bit of a challenge in my cluttered garage but got it done. Most of the frame is 100x50x5mm except the two stiffeners in the front bay which is only 3mm wall

My calcs suggest it's currently about 105kg so with the axle, hitch and base added it should be around 230kg leaving plenty of load capacity on the 1300kg axle (1700kg hitch). Hoping the nice weather will stick around so I can drag it outside tomorrow to bolt the axle on so I can measure it up for mud guards and finish this stage of it off. For now it will just be a flat bed, possible with a sheet of OSB dropped on top so I can get on and use it. When there's more time I'll think about adding some sides.
You must log in or register to reply here.

My LC78 Troopy overland Design and Build in New Zealand