GF is awesome... she's said as we're doing the job once, do it right... so new headers and exhaust! Hurricane extractors that don't follow the stock routing and then a 2.5" system from there back into a 200cpi cat and perhaps a small silencer, but the aim is to keep a bit of noise, but not too drony for the longer journeys as it will be used for some longer trips (Cape York 2015!)

So I fly out tomorrow morning, and my instructions have changed to the point of getting the car ready for headers to go straight on. I've now got the manifold back on, and think I have only got one or 2 vacuum hoses wrong (worse case is the the diagrams are on ToyoDIY anyway), so it's all ready for the headers and then the waterpump and timing belt to go on.

It's not been the fastest process, but I have done 7 assignments ranging from 1000 words to 4500 words and 3 exams in that time... and worked 3 days per week.

Who you going up the Cape with?

Cape will be with one of the Guys I know from Volvo's, he's the one in pics on the other page running at the bottom of the steep hill. He runs an older Hi Lux that is pretty well set up (just has a knackered diff at the moment and needs a 5spd gear box fitting) and possibly my boss from work with her 2014 Holden Colorado which could be interesting!

His is the Yellow ute, whilst the FJ60 belongs to another one of the guys I know from Volvo's...

I'd rather take a lamerover.

The guys from 4WD TV recently traveled to near Port Macquarie from Melbourne.

On the way there both Colorado's broke down!

I'm not sure she'll go, but AJ is keen, so we're partly sorted!

Realised that this has been a bit blank for the last few months... I might ask a Mod to retitle the Thread to Ed's Australian Garage, and I'll see if I can redo the photos as Farcebook has changed the URL's

Ran for a couple of thousand km's without an O2 sensor, burnt a bit more fuel but that was about it, but it now has one fitted again; I'm glad that we fitted quite a few flanges as it's really easy to drop a section out for gearbox or other purposes.

I had the in-laws visit from Scotland (I'm sure that living in Australia was supposed to mean that we couldn't get unexpected visits!) as a Christmas surprise, which was a mix of good and bad...

The bad bit first... I'd got a few problems when I refitted the heads; I had an oil leak which I thought was from the rocker cover gasket, but it was in fact from 2 bolts that had come loose; we'd gone to visit a friend and her family 500km away (where we found the in-laws) and her father runs a garage, so he had a look and used some magic paste that locked and sealed the thread. Whilst we were in there, there was a noise that wasn't great from the timing belt, so we pulled the cover off and I'd got the tensioner spring not quite tight enough; by that time we'd done about 6500km since doing the heads so we were a bit lucky! In refitting the cover though, a bit of rubber came off, and we suspect caused the timing belt to skip a couple of teeth after another 600km (luckily we were back home) amazingly the 3VZE runs when the timing is out 2 teeth on one bank, and 3 on the other! So reset the belt, and it seemed OK, but it seems to be a bit stretched, so I have a new belt to fit in due course. Add in the other fun part of the power steering pump fouling on the EGR bracket, which makes removing the belt nearly impossible (now remedied with a grinder) and it's been fun...

On the flip side, we got a set of cheap Narva driving lights for the really cheap price of free; just needed a wiring loom creating, so we got a kit and fitted those, and the father in law got us a UHF for Christmas; because he's into Ham Radio he had quite specific requirements of what it should do, and in all honesty he was spot on!

It had to have a speaker mic. That was the main requirement he stipulated.... so that gave us some of the Uniden range and some of the iCom's, but not really anything from GME. Price was a factor, and given I found a Uniden UH7760NB with 2x antennas for a good price (sub $300) that was that!

So I spent part of a day pulling the dash apart to find cable routing options, and some lost trim pieces and a lot of fluff, and ended up with it fitted like this:

It's mounted in lieu of the ashtray (which was only used for storing shopper dockets) so no real loss (and I think I've just come up with a new idea for a storage solution) using the screws that held the cradle in place and some brackets I got from Bunnings for about $3! It uses the stock bracket, so that gives me a base to make a small shelf on as well.

Mic mount? Hi-tech.... wife had a hair bobble/pony tail thingy on a bit of cord (doubles as her hair band at times) and I was using that until I realised that it would go on the cup holder, meaning I can easily see the mic (and controls) from the drivers seat, or the passenger can use it as well.

I'll update this thread a bit more often, rather than creating other ones and go from there with it!
Last edited: May 30, 2015

So... done some more bits and pieces to it since the last write up; ended up replacing the timing belt as it skipped a couple of teeth back in January, and never could get the tension right again; we reached the end of the tensioner pulley:

I got bored of working on my dissertation/waiting for survey responses, decided to mock up Ben Style some drawers for the back:

The fuel filler is a bit of a pain on this right hand side of the boot, so makes it a bit fiddly to get it right. Knife and hack the cardboard until it fits gives me a pretty good fit.

Next up is working out what to use as the base, and how to mount it. There's 2 holes in the floor somewhere for the top-tethers used on Aussie child seats, so I'm thinking that those should do the job nicely!

I'm probably going to make the drawers in 2 halves, so we can use the full length of the boot inc back seats if we need it, but they're only going to about 225mm high all up, just enough to get everything out of boxes and into the drawers out the way. Looking at using cable tray and something equally light weight for the drawers; possibly going to do 225mm cable tray and 200mm cable tray inside, with the runners made using PTFE boat slides top and bottom (will hold the drawers to within 1mm, which is about as tight as I'd want it to be)

OK, drawer budget got lost... or spent on something else more accurately... Delz' motorbike got in the way, then rego and visa and stuff got in the way again. Add in that I was supposed to be ordering some new shocks this week, but Delz' got a $750 labour bill for her bike service and they're on hold again.

I did find some spare money to get some useful bits:

2 of these for charging the tablet and phones whilst we're travelling; $25ea from Jaycar.

They actually look like they're going to fit in the standard Toyota switch blanks that I have spare in the 4Runner, so they're going to be mounted just out of the way instead of the cable trailing all around the gear sticks... Now to work out how to run the wiring for it...

What bike has she got?

What bike has she got?

Which seems a really big bike for someone who is 5' on a good day, but the seat height is stupid low in comparison to a lot of newer bikes, and we're hoping that we can lower it a bit more by reducing the preload on the rear shock.

Shes got a cooler set of wheels than you mate!

Cant decide between a jetski or a bike! Think I should just buy both!

Drawer system got binned for a lighter solution; I previously had a Coles blue crate and a pink bucket for storing tools and bits and pieces.... Now I have 3 fancy canvas bags, thatI got them from the local saddlery, built to my requirements after spending an hour talking with them about what was practical and what I wanted from them. Cost? AU$150... not bad for only ordering them last week, and made locally.... The bags are all 430mm wide, and 335mm tall. 2 are about 335mm deep, whilst the rope bag is about 120mm. 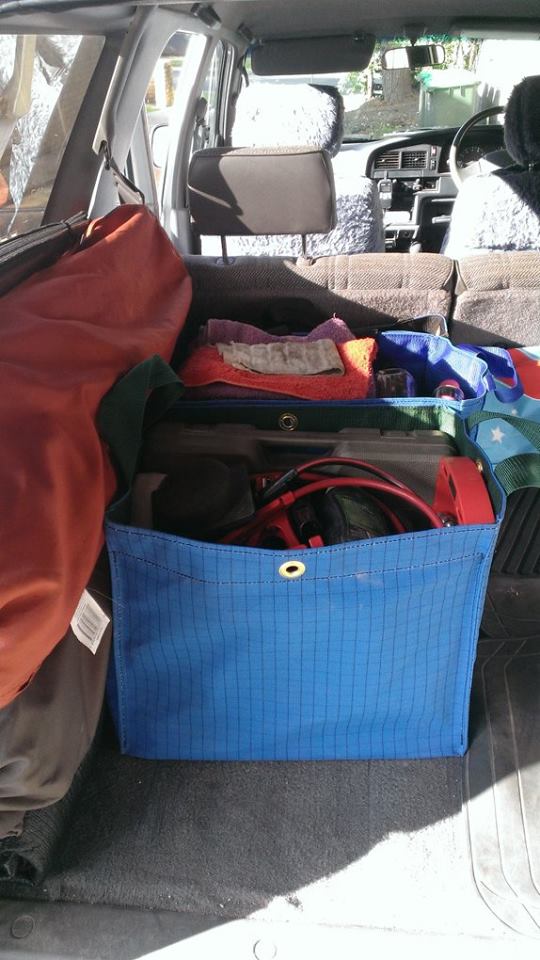 Quick update... Farcebook decided to tell me it was 5 years ago today we got the 'Cruiser... still miss it, and everytime we go down to the Coast I look out for it.

In other news Delz has new motorbike: 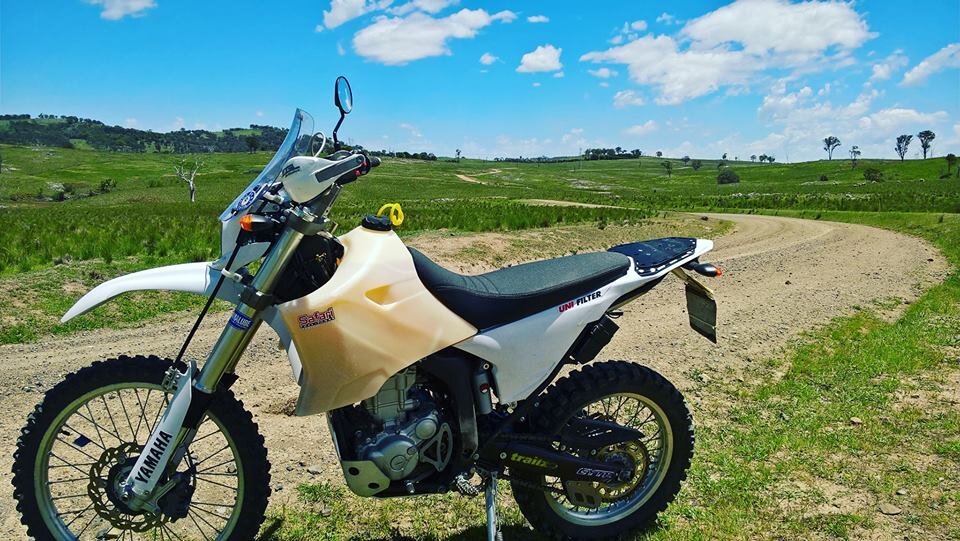 Interesting choice of bike! I thought she was getting/had a Honda?

Nice its got the bigger tank and comfier seat, there 2 areas where my bike needs improving!

Ben said:
Interesting choice of bike! I thought she was getting/had a Honda?

Nice its got the bigger tank and comfier seat, there 2 areas where my bike needs improving!

Nope, she's also got a 1992 Yamaha XT600 that I'm going to be using - she doesn't want to get rid of that either, so there's a growing number of 2 wheelers.... That also has a long range tank (23litre or so) and a reconditioned seat after a horse took a bite out it...

The WR is fast as **** but its pretty uncomfortable on big road rides and I find its a bit too big and heavy for me off road, so although I love it, its not great on or off the road.

This one may still need to be tweaked a bit more - probably a lowering link would be a good idea, but we'll see how she goes with it.

The XT is great, gobs of torque as soon as you open the throttle, whereas the WR is a lot peakier in the power band, and is flat until you hit that then BAM... or so Delz tells me... and it pulls quite happily to 100kmh on the dirt roads.... and wants to keep going. The best thing is it starts first time in the morning, nice and easily - much nicer for everyone at 3.30am this morning than starting the XT which needs warming up as it's carby.
You must log in or register to reply here.
Share:
Facebook Reddit Pinterest Tumblr WhatsApp Email Link
Top Bottom
✖
AdBlock Detected