I think I should change my lower wishbone bushes, the front ones are pretty worn/cracked.

Do anyone has any experience of polyurethane bushes in 90-series? I have heard good about SuperPro-bushes (http://www.superpro.eu.com/WhySuperPro/), but Milner sells some PU-bushes too but they don´t tell the manufacturer (http://www.milneroffroad.com/categories ... =11258&p=2). Has anyone tried those?

I don´t want to get any stiffer bushes which make driving more harsh, but how to know how it perform before installation?

BlackWidows your man to talk to with regards the Milner bush's

On the other forum this topic here http://www.tlocuk.co.uk/forums/viewtopic.php?t=6996

Polyurethane will give a harsher ride than the rubber OEM ones - polyurethane is generally harder than rubber. Just compare the Superpro's with OEM to see!
Benefits of polyurethane are mainly longevity and toughness, so good if you use your truck hard and do big miles on rough roads. Usually cheaper than OEM. Negatives are a harsh(er) ride.
Benefits of OEM rubber - better ride and vibration damping. Negatives: Life expectancy, although unlikely to be an issue for normal use. OEM is pricey from Mr. T.

Andrew Prince said:
Polyurethane will give a harsher ride than the rubber OEM ones - polyurethane is generally harder than rubber.
Click to expand...

Yeah, but there is several version of polyurethane, some are softer than rubber, some are almost nylon.

bigyun said:
Also we noticed that the bushes had gone soft and starting to wear.
Click to expand...

KZJ90 said:
Yeah, but there is several version of polyurethane, some are softer than rubber, some are almost nylon.
Click to expand...

Matti, I'm not disputing that there are many grades of polyurethane, just like there are of rubber

My point is that the polyurethane used in bushes tends to be harder than OEM rubber. I have sets of Superpros and OEM bushes for my 80 sitting in my shed and that's what my comments are based on. Are all polybushes harder than all rubber bushes? I don't know. But Superpros are harder than OEM for 80 series!

You pointed out that you do not want a harsher ride. I'm saying I think you run a risk of this if you go with polybushes. Your choice though

PS: In case you were not aware, Bigyun on the other place = Blackwidow here

KZJ90 said:
Yeah, but there is several version of polyurethane, some are softer than rubber, some are almost nylon.
Click to expand...

[quote="Andrew Prince":h5iiafeh]polyurethane is generally harder than rubber
Click to expand...

Matti, I'm not disputing that there are many grades of polyurethane, just like there are of rubber

My point is that the polyurethane used in bushes tends to be harder than OEM rubber. I have sets of Superpros and OEM bushes for my 80 sitting in my shed and that's what my comments are based on. Are all polybushes harder than all rubber bushes? I don't know. But Superpros are harder than OEM for 80 series!

You pointed out that you do not want a harsher ride. I'm saying I think you run a risk of this if you go with polybushes. Your choice though

PS: In case you were not aware, Bigyun on the other place = Blackwidow here[/quote:h5iiafeh]

You are right, they tends to be harder and it seems like the design is always "full" in PU´s, I mean there is no "air section" inside the bush like oem rubber bush. I don´t know the right words, hope you understand. Pic for example (not from Land Cruiser):

I don´t know what makes the harsh ride, bigger/heavier tires or the thing that they are able to move/vibrate a little at sharp jumps. 120-series with original tires feels much sophisticated, if swallows sharp jumps much better.

Just had all mine replaced on the 80 with super-pro. So far, I can honestly say I haven't noticed the ride being any harsher.... Only caveat is that I do have firm springs anyway.

I was intially convinced to replace with OEM but was persuaded that super-pro are better suited to my planned Africa jaunt where longevity is crucial.

Did a fair bit of trawling of African and Ozzy forums regarding the OEM versus poly debate and found that there wasn't a clear consensus on the merits of one over the other. There is a slight leaning toward the poly but not by much with strong advocates of each. However, if a softer set-up is your preference there is definitely a consensus that poly tend to stiffen the ride a bit over OEM.

But the upper and lower wishbone bushes don't contribute to ride, do they. They could be solid brass. They do not lend stiffness to the up and down of the wishbone that would be noticed in the suspension. You have springs, dampers and tyres for that! I am talking abut a 90 IFS here of course.

I would agree with Lorin's approach - if longevity is key and you're going into a challenging environment, then polybushes make sense IMHO. If you're plodding around Europe on mostly good roads and the odd bit of off-road stuff, then OEM probably offers a better compromise.

Chris, why would the wishbone bushes be rubber and not brass (or stainless or similar metal) on a 90 if they offer no benefit to the ride? I think the rubber bushes do contribute to the ride by providing some "give" and helping absorb some vibration. How much rubber vs polybush on the wishbones would affect the ride, I dunno - probably less significant than on the ARB I would guess.
Just my 2c.

Chris said:
But the upper and lower wishbone bushes don't contribute to ride, do they.
Click to expand...

Yes they do. See my earlier picture of VW Polo/Skoda Fabia/Seat Ibiza wishbone bush. They are so loose that they moves almost freely about 1 cm. Feels too soft at braking although they seems to be at good condition. But they prevent harsh feeling/swallow holes better, at least on the engineer´s design table.

Sorry Guys, I disagree. Sure, being soft they have a little give in them so that they don't transmit vibration, but I simply do not see that they give any change in the ride. If you can detect a change by swapping the bushes over the massive effect that tyres, springs etc give to the ride then you are a better man than me., The point at which they pivot on the mounts and the amount of movement up and down simply isn't detectable in my view. It's not possible to transfer the motion of the wheel up and down into vertical movement in the wishbone bush - it's a pivot. You would have to lock the damper and spring solid.

I think it's debatable both ways. I agree that the scope for affecting the ride is relatively small. But, on the ARB, the bush on the bar (not droplink) that holds the ARB to the body and is simply a pivot point - you would think that there is little scope for affecting the ride, yet it does apparently. I think small things in the suspension can have a quite pronounced effect on ride and "feel".


Chris said:
It's not possible to transfer the motion of the wheel up and down into vertical movement in the wishbone bush - it's a pivot.
Click to expand...

Not 100% true. True that the majority of movement is in the vertical plane but the wheel also moves forwards and backwards (i.e. laterally too) when articulating and steering - remember the front wheels have caster, so forces are not purely in the vertical plane. The horizontal movement may be small but it happens. The bush being flexible allows this - it's quite easy to see how the hardness (perhaps compressibility is a better description?) of the bush would effect the feel of the steering, for example.

Andrew, I do not disagree with what you are saying, but the question was about the wishbone bushes affecting the harshness of the ride. True tightening up the steering, giving better feel etc etc - all true, but in terms of should I buy OEM or poly because I am worried about it being harsh - that's the bit that I don't think will be noticeable. I polybushed my steering rack. What a difference. Well a difference to the knackered old ones in there. But if I had bought a brand new cruiser and swapped the bushes that same day, would I have noticed a difference? I doubt it. So here, replacing worn old WB bushes is bound to give a huge improvement. But different to replacing them with either OEM or poly? Nah, I don't see it. And that was the question. Just the same with taking a beaten up old 80, sticking IRONMAN on there and saying 'Well, does it feel different?' It's impossible to evaluate like that. See my point?

Maybe over 15 kg heavier wheel/tire combo would like to have little stiffer bush to work as well as designed...

I remember my stock tire/alloy wheel weighted about 27-28 kg, now my tire/wheel combo weights about 44 kg. The difference is almost 60 %!

Chris: Do you know are those Milner´s bushes made by SuperPro? They don´t want to tell me... BlackWidow (Steve) thought that they are... 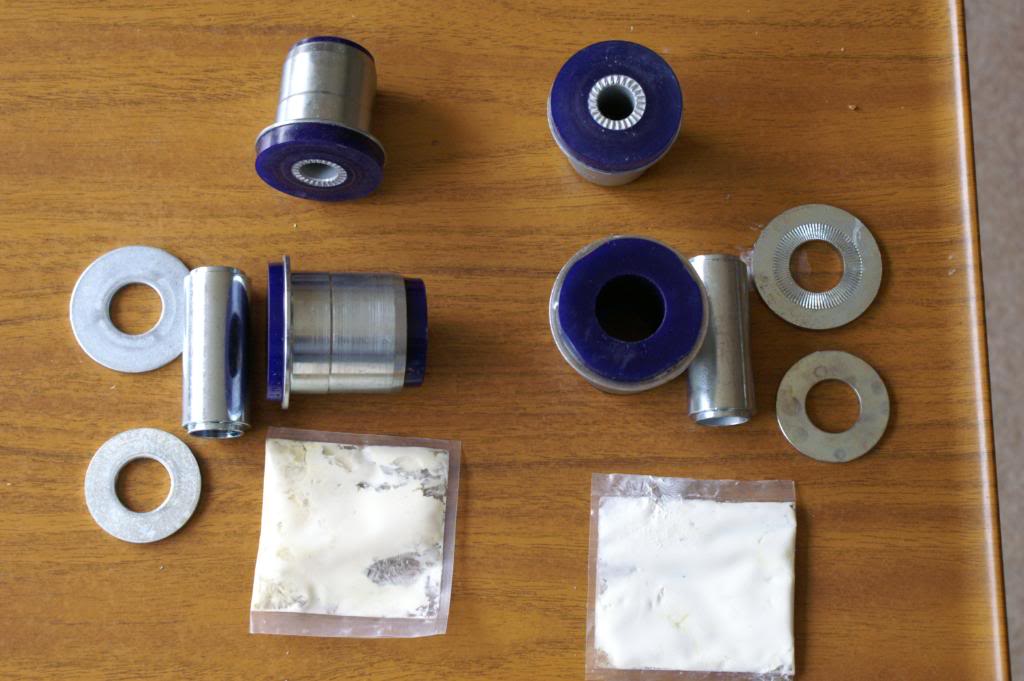 Right then guys here is my opinion on the bushes and it is my own opinion. As I said in the other links the old OEM bushes were soft and worn so needed changing anyway. I went for the polly bushes and I have to say that I was glad that I did.

Yes they are firmer than the OEM ones but as SuperPro will tell you, grease them with the supplied grease as they are moving parts and this is the important bit. As we have all been taught never grease bushes as it will degrade them you now can and this makes a world of difference. I have done all the bushes on my 95 now and I am more than impressed with the difference in ride quality. It is so much smoother and no harsh vibrations, the vague sponginess of the steering has gone and the steering is so positive it is untrue. You turn the wheel and the truck starts to turn no matter how little you have turned the wheel. You get a lot more articulation than with the old bushes and body roll is greatly reduced.

Now for the down side (in my opinion) as you have all pointed out the polly bushes are firmer and unlike the OEM ones are full contact. By that I mean the OEM bushes are a 3 point contact type thus allowing more flex-abillity where as the polly bushes are solid. My concern is that Toyota designed their bushes like that for a reason and I am wondering if the firmer bushes are going to put extra stress on other components that they are not designed for. To this end I am keeping a close eye on the mounting points for fractures etc. I think I may have the first signs of things moving that should not as my ASFIR belly plates are now clicking due to chassis twist (I think). I have put spacers on the plate mounts and the ticking has stopped but it does make one think

KZJ90 it was the old OEM bushes that had worn not the polly bushes. I did the wishbone bushes around a year ago and they still look as good as new.