Who is doing what maintenance today?

Fitted my Gav's Custom 2" receiver after getting it powder-coated

Full brake overhaul. New rear pads and discs and new front pads and dis.... Oh wait, no. That's right The Nitrac discs from Motorsport World didn't arrive as promised did they. So I had to put it all back together with old components. More on that story another day. They'd better be good discs that's all I can say.

Lol also missing some Nitrac discs so refitted both stub axles and CVs, steering relay bar and one hub with disc as I was intending to MOT it tomorrow. Decided that I will not have enough time to make it for the 10am MOT so started taking the rear axle apart, discs off and fitted ARB bushes and replaced the suspension on one side. Spent ages today trying to figure out how to preload the bearings correctly to get the correct preload, either my torque wrench is out or I am being incompetent, dunno at least I know know how to do it now.
B

Trying to fix a small crack in my front bumper - the job turned out into a bit more than that!

Well another good day out in the sunshine with the spanners in hand.

Tunned the front end which still sits a bit lower than the rear but with the added weight to come on the rear it should level out. Then got around to removing the rear plastic bumper 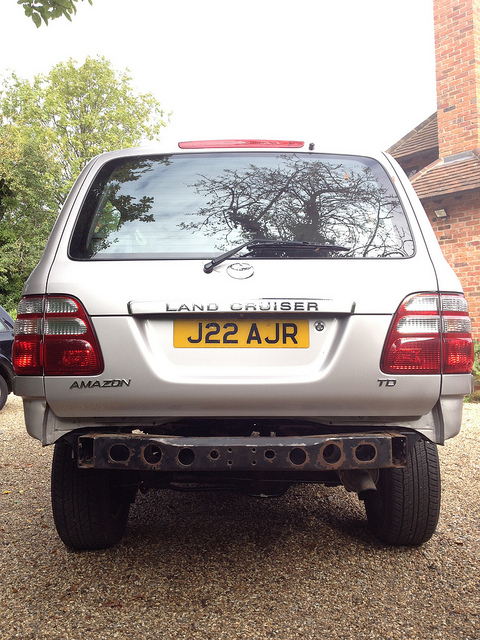 Got the grinder and wire brush out and cleaned up the surface rust ready for some dinitrol action at the same time removing the unwanted wheel carrier and brace under the car and in the process giving myself a bash on the nose when a stuck bolt finally broke free. Then test fit for the new bumper Hope to finish her off durring the week if i get the time.

Finished of the rear axle (hand brake, suspension, ARB bushes and all). Spent about half an hour hammering away at the rear cone washers but they defeated me. Fitted new hydraulic hoses for my winch winch I blew last Lincomb and fitted a "new" PS pump. All ready for priming tomorrow.

warrenpfo said:
... and in the process giving myself a bash on the nose when a stuck bolt finally broke free... Hope the nose gets better soon, it looks like that will be sore for a while!

Do you plan to fit a swing out carrier on the new rear ARB bumper?

Clive its all sitting ready to go. It comes in a kit form and you have to build it like Meccano. I just need to prep the rear and then fingers crossed it should be on for Lincomb. I have one swing out and will get a second at some stage but at £600 a swing out they not cheap.
Last edited: Sep 30, 2012
A

Ditto on the nose fella!!

warrenpfo said:
Clive its all sitting ready to go. It comes in a kit form and you have to build it like Meccano. I just need to prep the rear and then fingers crossed it should be on for Lincomb. I have one swing out and will get a second at some stage but at £600 a swing out they not cheap.
Click to expand...

Tell me about it! I fitted my unit about 4 years ago and for several reasons I've been disappointed. Don't want to put you off 'cos it's already too late, but I could give you some tips to look out for:

1. I was upset because loads of bits were missing from the kit, such as the gas spring-ram bolt-on ball at the bumper end, the small rectangular reflectors and other bits and bobs;

2. The swing-out pivot bearing assebmly never seemed to fit properly and always had play in it. I've re-bushed it since but it's going lose again. After 4 years at the price they are, I would have expected better.

3. The paint or so-called powder-coat is rusting through all over the place. It's expected to fail where stones hit just behind the mud flaps, but this rust is all over, especially on the wheel carrier;

4. The light units are the cheapest and nastiest that could ever be made. The units fill with water and there's no venting for them to dry out. The bulb carriers are rotted clean away on mine after 4 years. Not easy to replace either, with that peep-hole window design arount them.

So my advice would be to grease up the bulb and carrier parts inside the light units and make sure there's a drain hole or some way to let water or condensation out of the units.

Also keep your eye out for rust and please complain to the supplier if you see any. There's hardly any paint on mine that's not bubbled underneath with rust, even though there's no scratches in the finish. Mine had vertical rubber/plastic trims where the rear parts meet the side rails. These have disappeared, forced out by the two metal parts rusting and expanding. Mine is really Morris Marina stuff.

My complaints don't stop at the rear bumper. My ARB front bumper is as bad, no scratches but rusting very badly from the inside-out. Same story on the ARB side steps and front wing brush bars.

Sorry to dampen your enthusiasm, but your truck is so beautiful, it would be a shame to let ARB make it look so bad in a few years time. Please grease everything well, all the fixing bolts and especially the swing-out pivots.

I really hope you have more luck than I did with it long-term.

To conclude, the metal is thick and structurally they're very well made. The paint/powder coat (on mine) is crap and a disgrace at the price.

This year I hope to get mine off, front and back (and the side steps) and have them grit blasted and re-painted properly.

Good luck. Again, your truck is a beauty and deserves better than I got from ARB.

Thanks for the heads up, I'll keep my eyes open and fingers crossed. I've only had a few bits missing to date but nothing I could not source from my bits tin. I know of a number of people who have had there's powder coated again and they have been much better so know this will be on the cards. I have greased and sealed every bolt nut and carrier in the build so far so let's hope that helps.

You right in saying its poor show and ill cavity wax mine to help.

I made the mistake of just fitting mine. You appear to be doing a much better job!

Can't help saying it, you've got a beauty of a truck there.

Removed my knackered difflock actuator found the fault back plate disintergrated, and motor not working ordered a new one from Millners big bucks for not a lot.

Its worth having though, I have bought a used centre and new rear actuator and they make such a difference when they work.

Installed a working stereo last night as priority - you just gotta have tunes!

Fitted my new Nitrac discs, bled my hydraulics, filled tc and front diff, fitted front prop, cut my finger badly on a grease gun, ensured it's MOT ready but just found out my ABS light is on....

ABS light, have you disturbed the connections at all today? You can do the jump wire test on the diagnostic block and it will tell you which sensor it it Rob. Worth just pulling them out (2 mins as we know) and give the ends a wipe. The fronts have a little shim which you can remove to set the tip closer to the rotor when the magnetism starts to die.