I guess I am pretty proud and chuffed with my Landcruiser, can't deny that, so I'm happy to post up a few words and pix as I go.

It has been a long love affair with Toyota's best ever model produce. Not that I'm biased at all, but they stopped making bloody great Landcruisers in 1997. So I grabbed one in '99 whilst they were still fresh.
It was a top notch example, Toorak Tractor as we call them, and had very few miles but a few little extras.
For the past 15 years to date I have been tinkering, modifying, tweaking and driving it as much as I can.
I still have a few more tweaks lined up, I just have to fit them in between playing with everyone else's. But here's the score sheet to date. Colour is Mica Red.
It has the thirsty 4.5LPetrol 6cyl with Auto trans.
Some suspension was fitted when I bought it, since changed out, plus unbeknown to the dealership it had a front locker. There was no compressor, lines or switches to suggest a locker was fitted, but a barb was protruding from the front diff. It also had a Safari snorkel, alloy bullbar, and new All-Terrain tyres. An all round tidy unit. 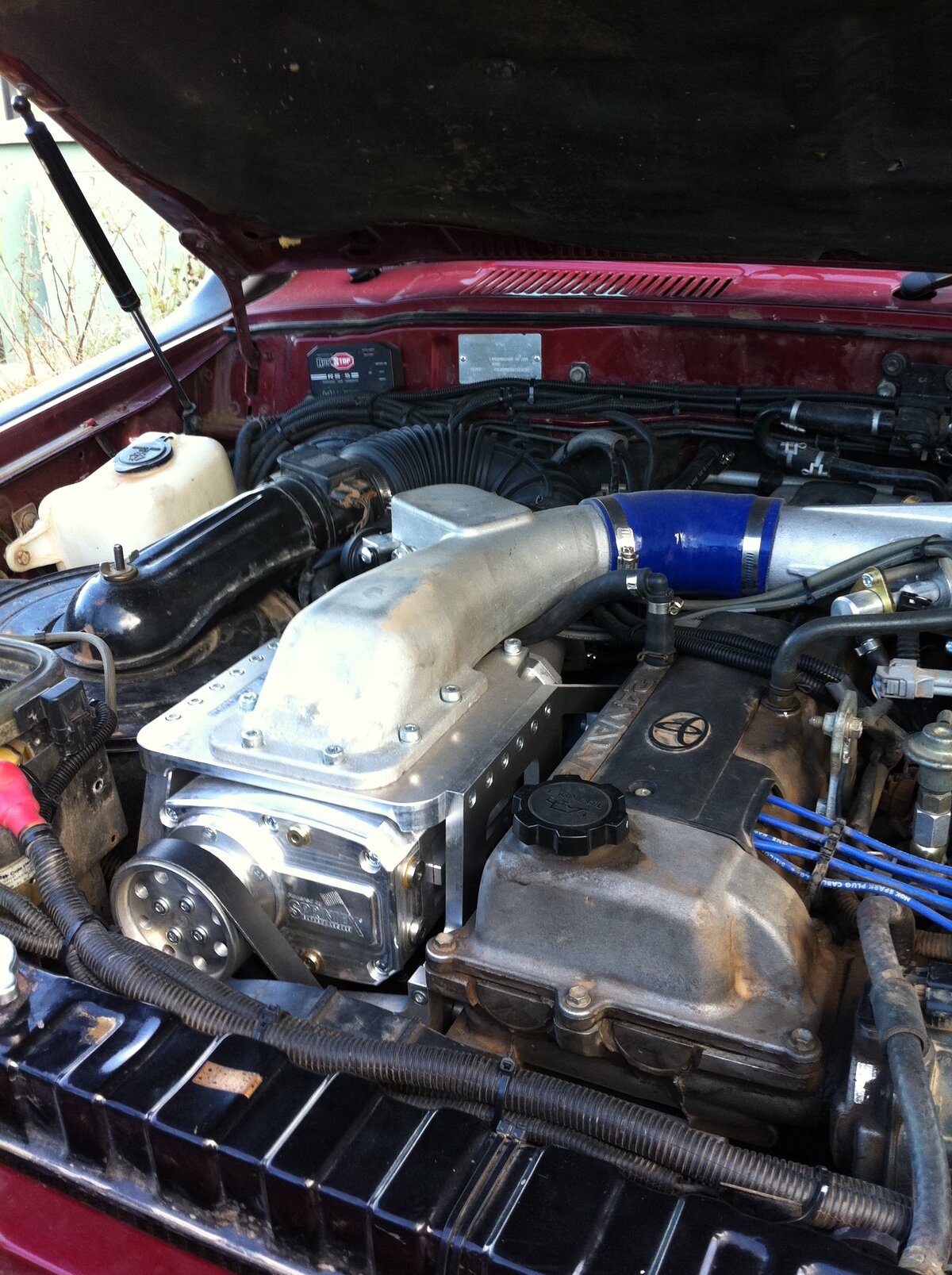 The auto has been adjusted to tighten between shifts.
I have retained the full time 4WD system, I prefer it because I invariably go off track mid-tour for a bit of fun and find the in-cab control of all drive systems is pretty handy.
I run a twin temperature sensing module tapped into the engine block and auto trans housing so I can monitor real time temps on the go.

A Glind shower system is plumbed into cooling/heating system, with Shurflo pump pickup at side of vehicle, outlet under-bonnet for connect the shower at the front in a shower tent.

The old girl now sports ARB Air Lockers to front and rear with diff breathers fitted. I have ripped all the diffs apart over the years, so they are all well assembled now. The lockers are operated with an under bonnet ARB air compressor, and plumbed in with the other air system for back up if needed as the ARB units have a history of popping compressor tank O-rings at the wrong time. For stopping I run DBA Cross Drilled and Slotted Gold Series Rotors with Heavy Duty Bendix Pads front and rear
My preferred brand of tyres are BF Goodrich MT Mud Terrains KM II in a 285/75R16 format running on 16” x 8” ‘Thunder’ Allied Alloy Wheels. They are monitored by a Tyredog system which covers all six tyres, plus some.
She got a new paint job in 2008 except for the roof, due to numerous scratches and “other issues” from a trip through the hardest parts of North West Tasmania. That’s another story.
The bar is an alloy ECB unit which has been modified with fitting of a custom winch cradle behind to house a special one-off chromed fully bridged 12,000lb T-Max winch running Dyneema rope, with an RF remote control handpiece. It also has a custom made stainless steel clutch handle. The winch is also in-cab controllable for power feed, and integrates with the triple battery system for best use of the twin Optimas. The bar has also been customised with ‘fog light and indicator inserts. The ‘fog’ lights themselves have been modified with 55w HID system that takes out retinas. Them in conjunction with the 35w HID Lightforce XGTs and upgraded 35w HID hi-beam lights provide sufficient light for night driving. The low/hi beams have been upgraded to Xenon Blue lamps which are a nice white to match the HIDs.
A custom made front number plate was made to allow all that gear to sit in behind and still access the clutch handle, etc.
The Sill bars are customised TJM Outback slider bars (suit 100 series IFS) but cut and modified to suit my 80 series chassis
Rear is a BOSS Twin Wheel Carrier, custom number plate bracket, custom high lift jack holder.

Roof Rack is a modified steel rack to suit my Hannibal roof top tent, with front rack area. It is about to be ditched in favour of a custom made alloy unit by us, which will still have the raised back section for the ten, with under tent storage racks for the solar panel, ladder, plus lights and other bits. An Open Sky awning is boled to the side on custom brackets as well.

Rearward facing lights is 10 watt LED work light set up for camp set ups, but wired to come on auto in reverse and manual in-tailgate switching for camping. The tailgate and interior is also home to a few other LED lights, all switchable where we need them.

Interior includes Stratos 3000LTSS suspension seats, fitted with air adjustable lumbar support and armrests, cloth material fitted with custom made sheepskin covers, including arm rests.
We run a VMS in-dash media system, with unique camera, integrated into existing speaker system.
There is a custom made over-head console which looks pretty original in style, except for the array of switches and bits. 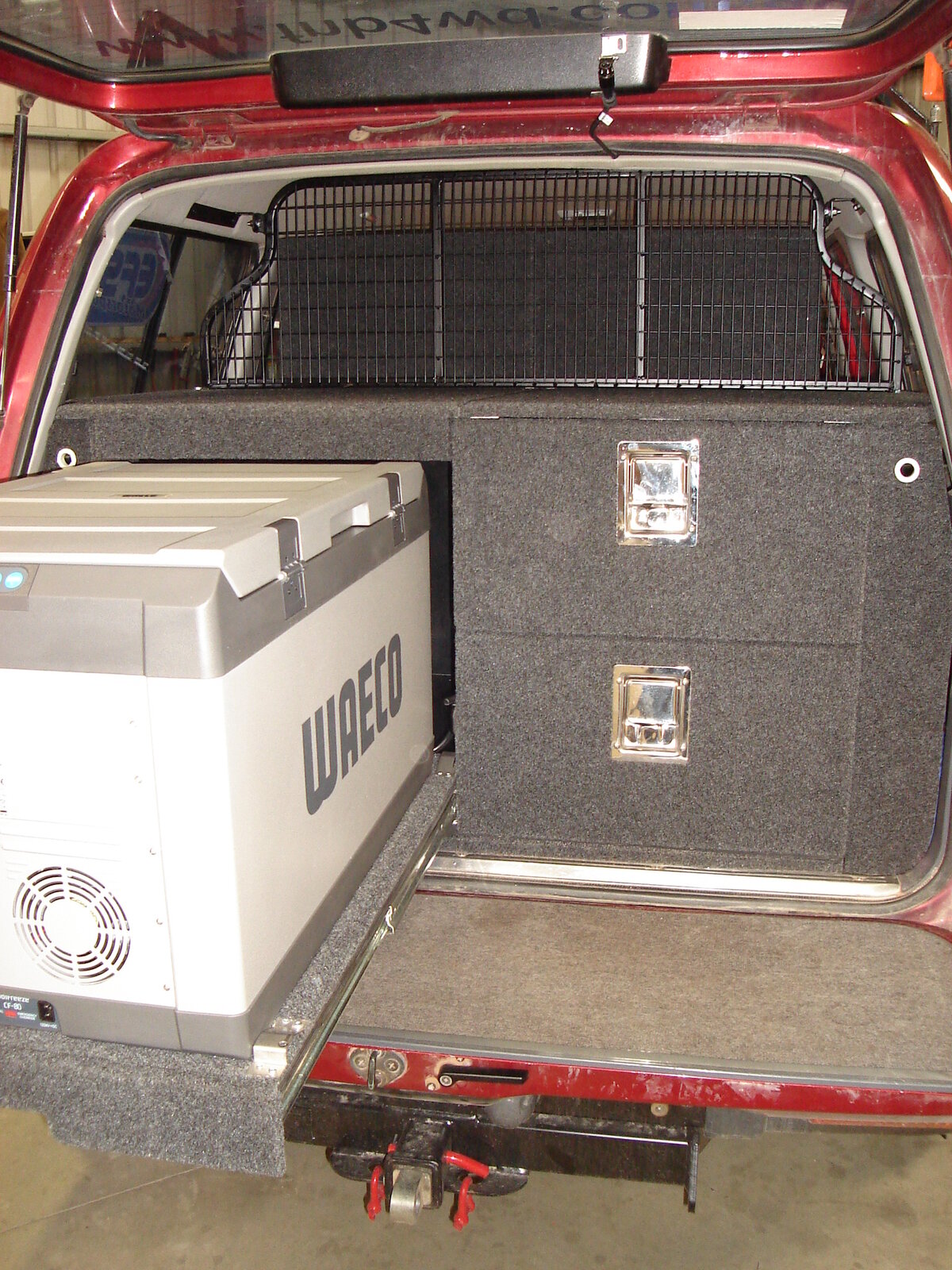 For the air system she has twin custom air tanks to underside between chassis rails and bodywork, plumbed to 2[SUP]nd[/SUP] compressor, and linked via in-can controlled solenoid to the ARB air compressor running diff lock and extra tyre outlet, linked with T-max compressor system. 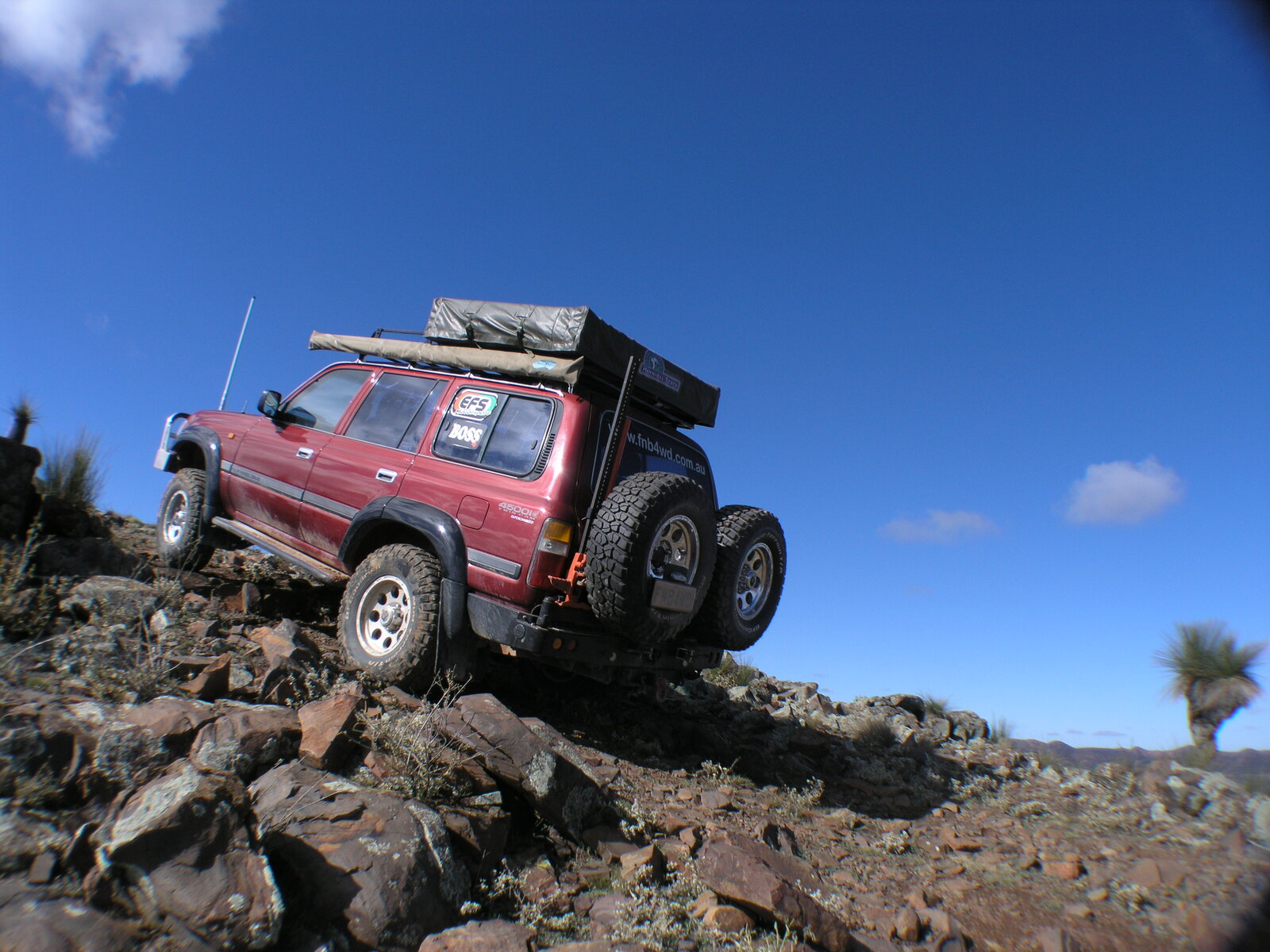 I think I have covered most bits, but will throw some photos in later as I go to give you something to look at instead of reading.
I hope you like my ol' girl.
Cheers
Chris
Last edited: Jan 21, 2014

S***, Chris I don't think there is much we can say about that other than WOW. A supercharged 80? Man, that's the dog's. Have you considered modifying it all?

Some nice parts on there that we just can't get. We have little choice and all of that is massively over priced. We should arrange a shipping container!

Yeah, you're due a flaming for so few pics there Chris

Very nice. Bet that picks up its feet nicely!!

Whoa. Very impressive. Love that first pic in the dunes - looks like some b*stard has stolen your wheels!
Don't like the adverts?  Click here to remove them

Chris, as far as the missus is aware, it's all 'repairs', not un-necessary modifications. OK !! Just in case you cross paths with her and the 80 gets mentioned. It's ALL repairs......!!

Gav, here I was trying to be conservative with mega upload of files so I don't jam up the page or forum. I shall do my best to add more pix before I get flamed into oblivion.

Adrianr, ummm...yes !! She does. But I must admit it feels strange doing a burnout in 3 tonne of 4WD. But certainly gets up and boogies when needed. And its straight on tap too. Very nice.

I like that pic too Grant, my thoughts exactly. I was doing some training and thought I'd show them how to get out of soft sand. I got a bit excited.

You will never get flamed for too many pics ... more likely the opposite. You have seen Ben's thread right?

Oh yes, Ben's thread. I did notice he is rather selective and conservative with posting photos. I shall do my best to follow his example.

Sitting pretty in the workshop. 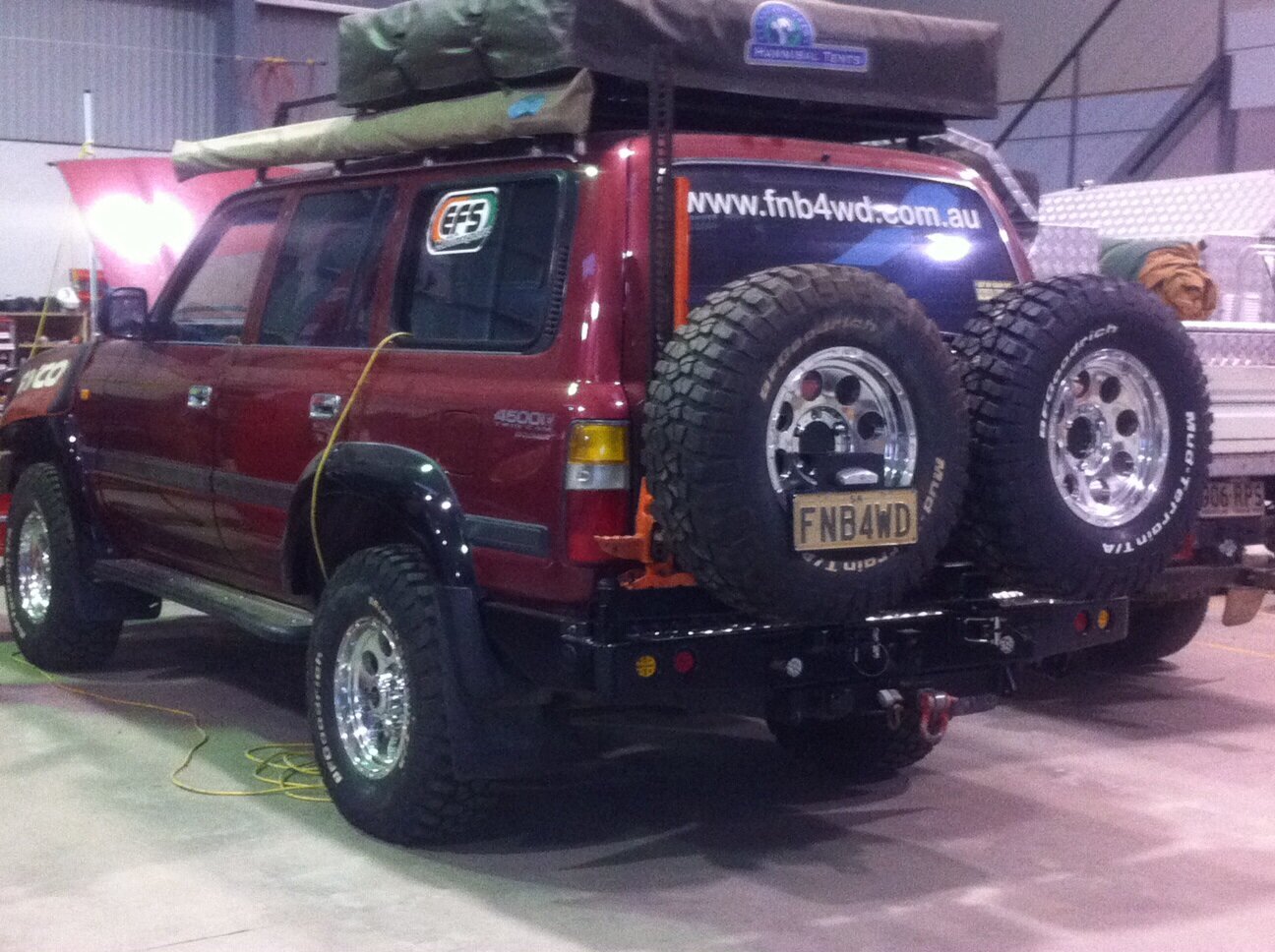 Actually worked out how to make this IPad load pix, so thought I best give it a go.

Thats Tony's Betsy next to mine. Plugged in with their little electric blankets......

Very nice 80, looks like a very useful tool for getting places few others can.

Fan-bloody-tastic Chris, I see you've got the Best colour one too.

By asking for pictures, there could be a few!
Having driven this machine, I can say " it flies!"

Oooh now that's one sexy 80 Chris! It's what mine wants to be when it grows up.

Nice rig Chris
When I look at my engine now it'll feel like something is missing!!!

They're not slow I bet that's a laugh to drive!

Thanks for the compliments guys. Makes one feel all the more proud.
Chas, was there any other colour???

And yes, the fuel capacity is there for a reason, that said I have obtained 17.8L/100 on a trip. I had to be gentle though.
But I can drive from Sydney to Adelaide without stopping for fuel, and from Brisbane to Adelaide with one stop.
I'm not sure how to put that into perspective to a drive in the UK, but its a long way.
Of course once I hit the tracks and engage low range with a bit of right pedal, you can hear the fuel rushing through the lines at a great rate of knots.

Funny story (had to be there), I filled up at an Outback station after many miles and went in to pay. These outback places don't run modern electronic bowsers, but the old rolling meters. I told the lady behind the counter how much fuel, around 220L. She wouldn't believe me and said I didn't read it right. "No one can put that much fuel in a car..." So she dragged me outside to show me how to read it right. Funny look on her face when she realised it was right and I was being honest.
Last edited: Jan 21, 2014
T

I just stuck to the speed limit, it just didn't take long to get there!

That's one incredible machine you have there Chris, you must be very proud of the old girl, in any circumstances!

I'll never be going quite that far with mods, but there are some on your list that are appealing to me. Thanks for taking the time to set such a comprehensive spec listing into your post, much obliged for that!

YOUR story with LandCruiser!
2