Bogged down and stuck - again on the farm

decided to give the new suspension a workout on some ruts and rough ground on the farm whilst I was out shooting.
Got stuck on some ruts, used rear difflock to get unstuck,
then got stuck again a minute later coming up to edge of track,
front wheels came up against compacted soil at track edge and back end bogged down - rear difflock was still engaged...
this time I used waffleboards under back wheels to get unstuck, quicker than getting the handwinch out, but needed a bit of digging, and a couple attempts before i had the waffleboards flat enough and deep enough

Front mounted winch arriving in Scotland next weekend, so will test that next time

...as would have been handy today.

plenty of trees to winch off in range

impressed by how useful the waffleboards are, used them in snow in winter to get unstuck too 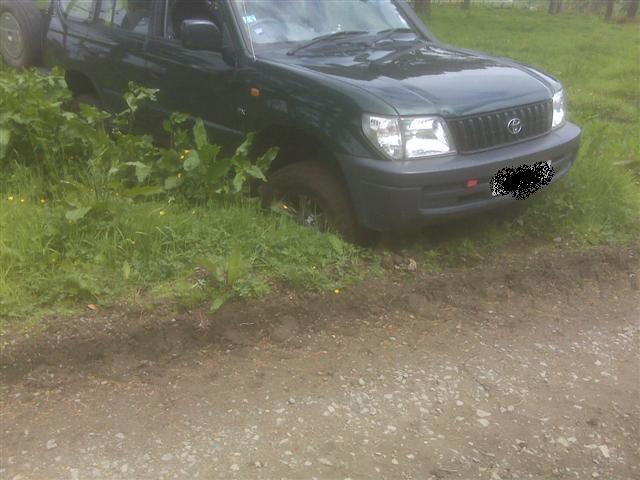 You definitely need a winch, Mate. That's proper bogged down that is. Looks like a little drain running along there. And a high water table. Virtually no grip in those. I have been stuck more times than I care to remember in situations like that, once you are through the surface you've had it. And generally you end up with half the field wound around the prop.

Some nice handy trees to have winched from too.

I kind of knew i might get stuck, but knowing I had the blackrat (tirfor) handwinch on board, spade and waffleboards, I thought i would give it a go

problem with the handwinch is it is a faff to dig it out from back of boot, under all the other recovery gear, and unwinding the wire rope from it cradle, then feeding through the winch takes an age, and then cranking it and my last resort recovery tool if digging and waffleboards fail

proper electric winch i hope will be a different story!

And a ground anchor. I have tried winching from bilberry bushes and it just doesn't seem to work. I think I went for an 80 so that I could get all the kit that I MIGHT need in there. I have been stuck twice now where I have had a ground anchor, but left it at home. Never again.

We famously got stuck for 4 hours where I could have been out in 2 mins with my rear winch. Where was it? 280 miles away. So the 80 will have built in rear winch for sure. We buried the spare wheel off the trailer if you recall. After that episode I fitted the front locker to Lil Blue. That would have got us out forwards I am sure. If I had taken my waffle boards of course. We had about 300 yards of straps and rope. Where was the nearest tree? About 310 yrds. We were down to our shoe laces at that point.

Coincidently, anyone reading this thread who fancies a set of waffle boards then I have a set of 38mm x 4" for sale at just £40 and they can be took to Lincomb next weekend !

are you a bit "under tyred" for this kind of work?

Doesn't look like you should have been stuck with a set of good MTs- what are you currently using?

Mud tyres used to be better on my old 4runner, but didn't like them on the road, before i got BFGoodrich AT's on it
so gone the All-terrain tyres route this time on the landcruiser.
generally they do very well, but not yesterday

That is pretty impossible ground. I have been in that situation with my muddies and still couldn't get out. Once the bottom of the vehicle is resting on the ground you have no chance.
If you had hit it at speed, you might have carried over - or you might have hit the stops! Well done for getting out unaided. That was a pretty good bit of recovery.

Coincidentally, I am looking at the same tyre for my 80. Not having muddies this time. Going for 285x75x16. Anything to put me off the GG AT2 Andy? I really want a more road biased tyre this time. With the capability of the 80, an AT tyre and reduced desire to actually bury the truck completely, coupled with an even stronger desire to maintain a half decent MPG figure 35" MTs just aren't the way to go.

I have had the General Grabber AT2 on the vehicle for a year, they have been good on road, off-road (except BOGS!), and in snow. I found the landcruiser better in snow than the 4runner (with BFGoodrich AT tyres) was the previous winter,

BUT the 4runner being part-time 4wd and having no centre diff, meant when you put it in 4wd it was same as the colorado with centre diff locked. and it had wider tyres than my colorado, so tended to grab side of deep snowy ruts left by vehicles with narrower tyres.

the GG AT2 probably have slightly less rumble on tarmac too

at end of the day, I would buy them again, as they have been as good as BFGoodrich, but significantly cheaper.
we will see how the wear

The more aggressive tyres just sink you faster in really soft ground like that, you're actually more likely to stay on top with clogged up AT's and take less recovering! An 80 truly up to the floor pan in muck takes a lot off pulling to break it free, ask Ian & Toby

Coincidentally, I am looking at the same tyre for my 80.
Chris