this has been fully booked for a while but just noticed that there's some spaces left as ppl have dropped out - anyone fancy joining me?

the thread is not there...

oops! I didn't copy all of the link try this

We can't read it without logging in.

Paste a hint here?
Don't like the adverts? Remove them by becoming a supporting member.   Click here
P

Is it the same as was in one of the LR mags about 2 years ago? Where you drive down inside of the caves under the mountains? Looks like fun if it is.

Looks great, but I'm ruled out, there's a height limit to drive in the caves of 2.1 mtrs and my Cruiser with roof tent is 2.33 mtrs, I could always air down the tyres I suppose

2.1m limit! clearly this trip is not for an 80 then. could someone copy and paste the details over here please, this cave driving sounds interesting

pics not copied over but the text in the post reads...


Fancy driving your 4x4 in some caves? now you can....
This huge disused quarry is one of the best natural non-damaging off road sites in Europe and the FWDC are giving you the chance to experience this unique site in an awesome setting and take you on a guided tour of the caves

Les Cinq Piliers (The five Pillars) is near the French town of Compeigne, just over 2 hours drive from Calais.
During World War I, there was severe fighting in this area. In addition to fighting, the German occupiers carved enormous caves into the hilly areas, which served as bomb shelters for their soldiers and ammunition. The industrious Germans chose this site for their tunnels due to its geological make-up. The gallery of caves accessible by 4x4's stretches out over a length of about three miles but you could explore on foot much further.
You can easily get lost amidst all the recesses, thoroughfares, and pillars. In the forest above the caves, there are many kilometres of rough tracks, with steep and slippery inclines.

We visited this site in February, met the local guys on site and did a full recce. The pics don't do the site justice but do give you a feel for what's on offer.

Approximate itinerary (may change slightly nearer the time):
Saturday 3rd: Meet at Dover for the 11.30am Ferry. Nice chance to relax on board before we convoy down to the site (approx 2 hrs). After arrival on site, there will be a Drivers briefing, follwed by a guided tour of the site and caves with our leaders and then you are free to explore! In the evening, there'll be a BBQ (included) and then merryment around a camp fire in the caves and then off to bed in your tent, also in the caves You are free to camp above ground if you prefer!
Sunday 4th: Early breakfast of tea, coffee and bacon butties (included) and then more driving and exploring the site. Around 3pm we assemble at the car park and head back to Calais for the 7pm ferry home.

Cost per vehicle and 2 adults is £150 which includes ferry, access to the site for 24hrs, rough camping (basic toilet facilities), evening BBQ with soft drinks, and breakfast. Additional adults @ £10 and children £5

There's a height restriction of 2.10 metres - any higher and you simply just won't get in the caves but there is plenty of other stuff to do above ground and walking around the caves watching others is also very cool, so you'll be welcome.

Rob said:
2.1m limit! clearly this trip is not for an 80 then. could someone copy and paste the details over here please, this cave driving sounds interesting
Click to expand...

Rob said:
2.1m limit! clearly this trip is not for an 80 then. could someone copy and paste the details over here please, this cave driving sounds interesting
Click to expand...

I'll second that, with the same spec, mine is a few mm under 2.0m without the roof rack

My 100 fits under the local tips height barrier, signed at 6' 6", so even allowing for the council playing it safe it should still fit under 2.1m easily. That's with approx 4.25" lift (including body lift), rack and 35's so 2.1m isn't all that restrictive really.

There's been no mention of a width restriction but I see a picture of a disco that is only just fitting through one gap.

that looks good i wanna go

width is fine! the tight bit was just us exploring and my cruiser got round no probs - an 80 series should be fine but the larger Amazons probably not! Disco 3's have been round.

Booking is now open and you'll be welcome to join me for the next trip in October! 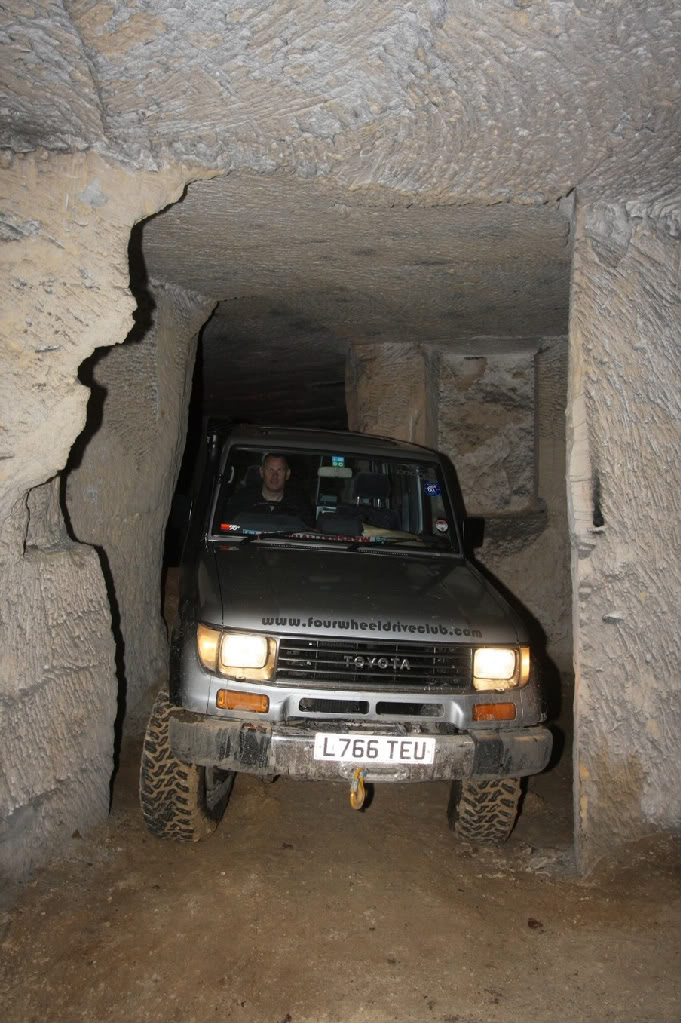 mmm well it's one of the larger Amazons that I have but then again is a D3 narrower than an Amazon?

it's only the entrance that's tight and once you're in there you can avoid the really tight bits as there's another track ....

I am very up for a trip like this. When is the next one?

That has sooooo got to be done

fridayman said:
I am very up for a trip like this. When is the next one?
Click to expand...