Stop it now clive, i cant keep spitting all this beer out..

chapel gate said:
Stop it now clive, i cant keep spitting all this beer out..

clivehorridge said:
I'll pay for this dearly....
Click to expand...

Well today started with lots of cursing and a stubborn exhaust egr stud ...
Really [email protected]&£ stubborn. I decided to bush mechanic it for the time being so I could remove the crossover pipe and get the dimensions I need for the intercooler.
Well what a difference that pipe makes... Turbo spools up about 200 rpm earlier and the boosty goodness gets straight in to the head. Now I'm not sure if it's because the heater matrix slows it as Chris suggested or maybe that the pipe was Coked up but it makes a hell of a difference.
Managed to get the intercooler into position but need to swap some alloy bends for silicone so I don't have to bend/cut any AC piping.
Back at it tomorrow but unlikely to finish till Thursday. Going to carry on using my convenient cardboard tube and lots of head scratching and swearing ... Which reminds me that f£@@/&;img stud. 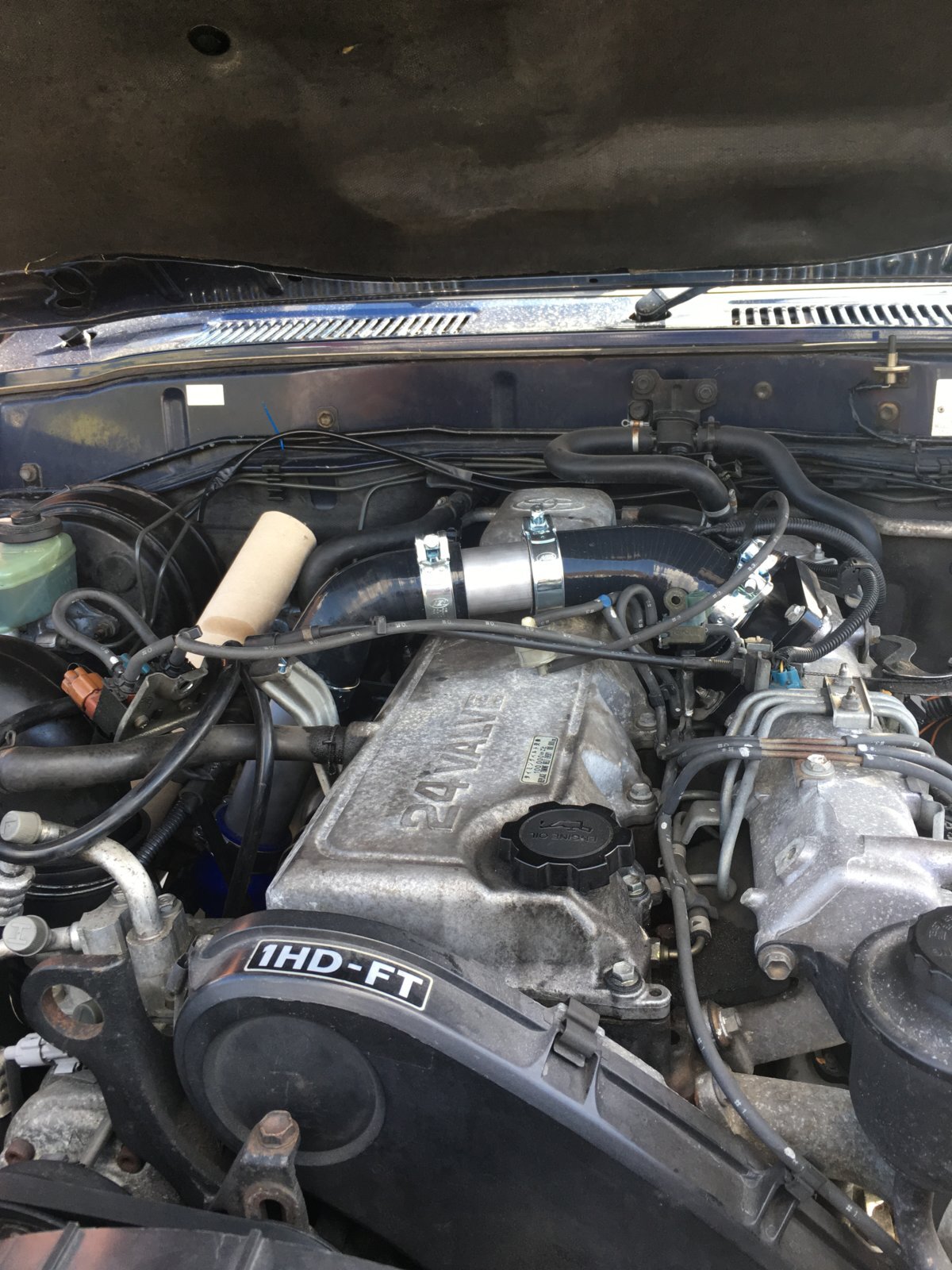 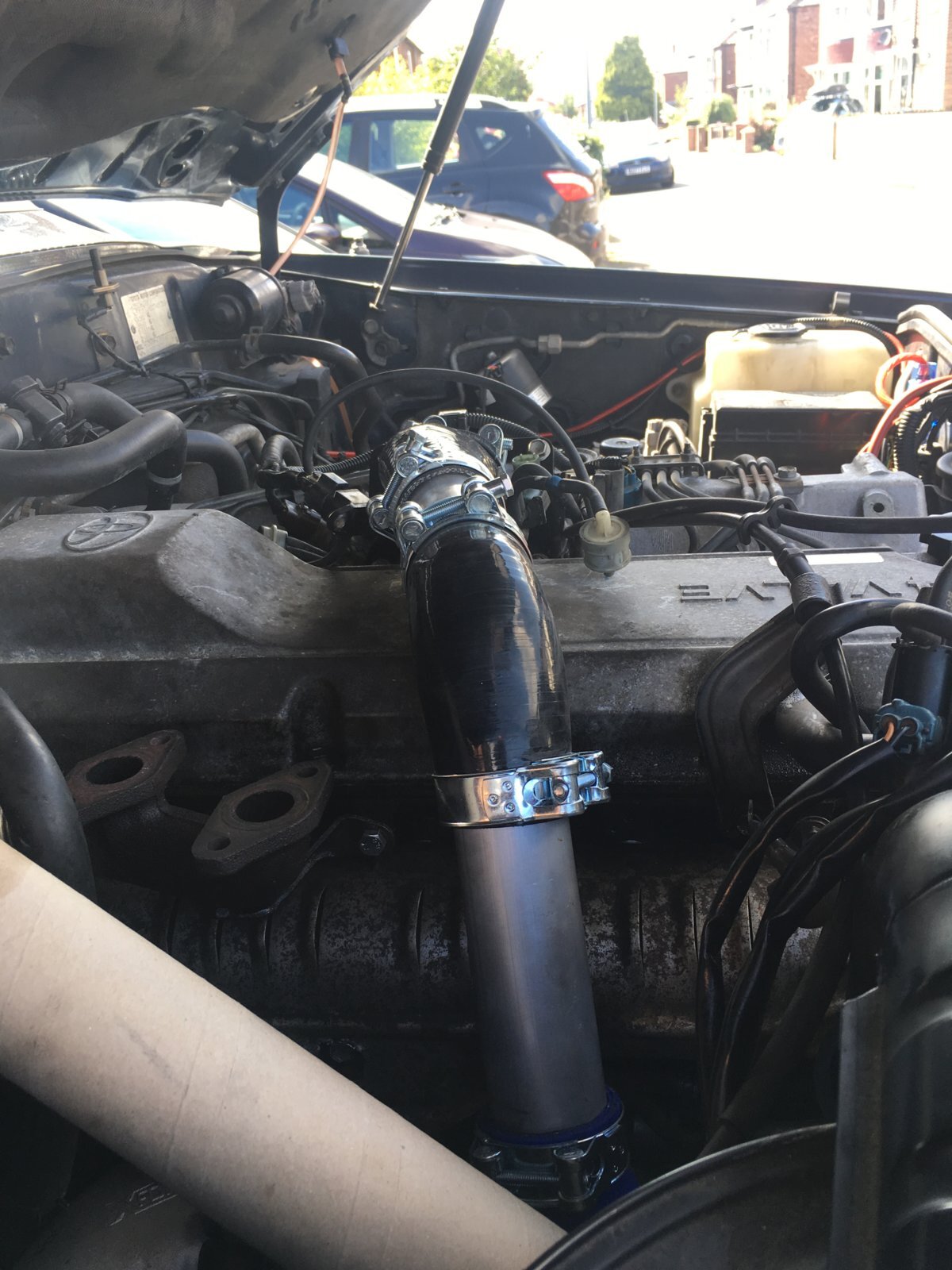 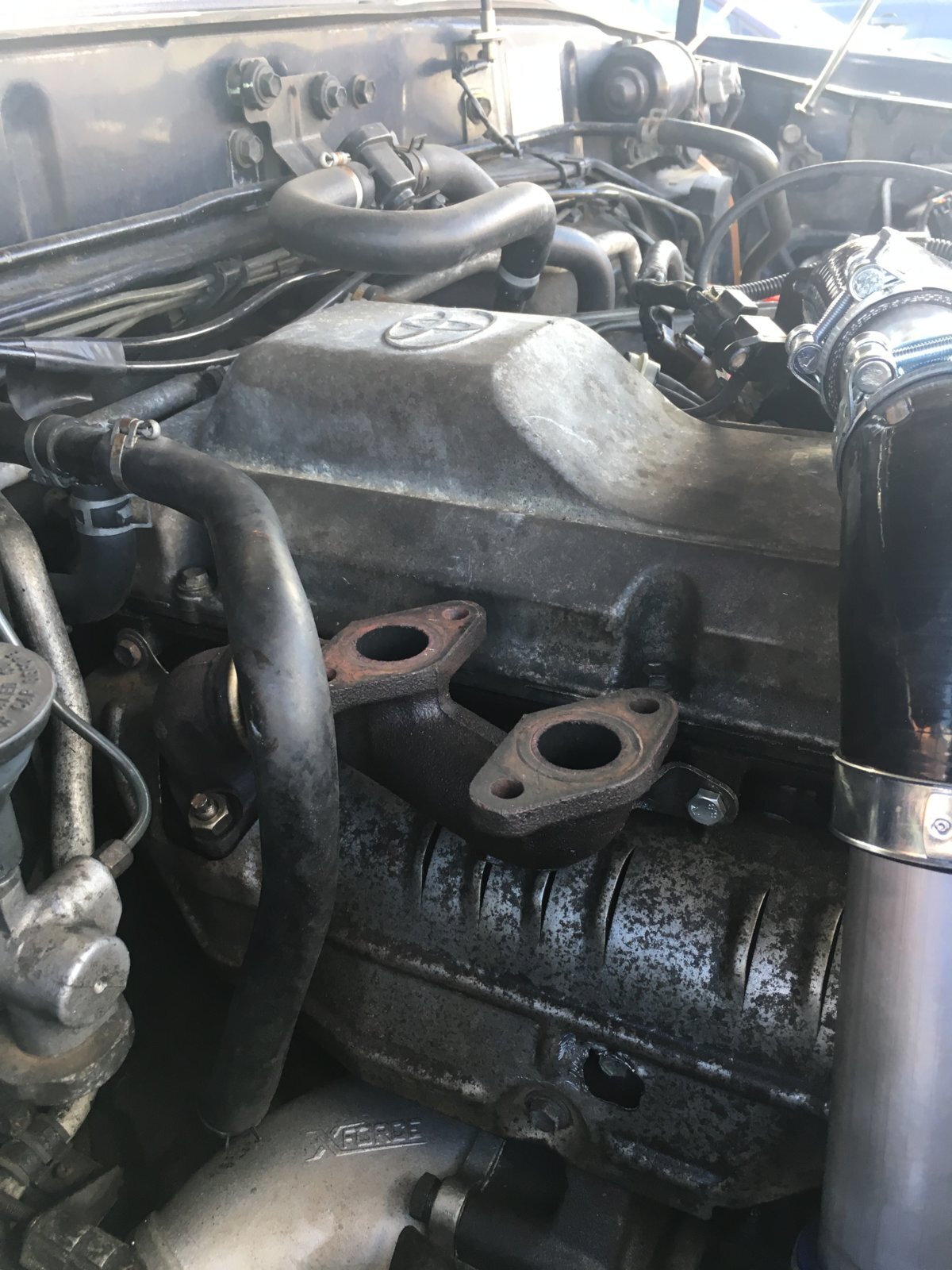 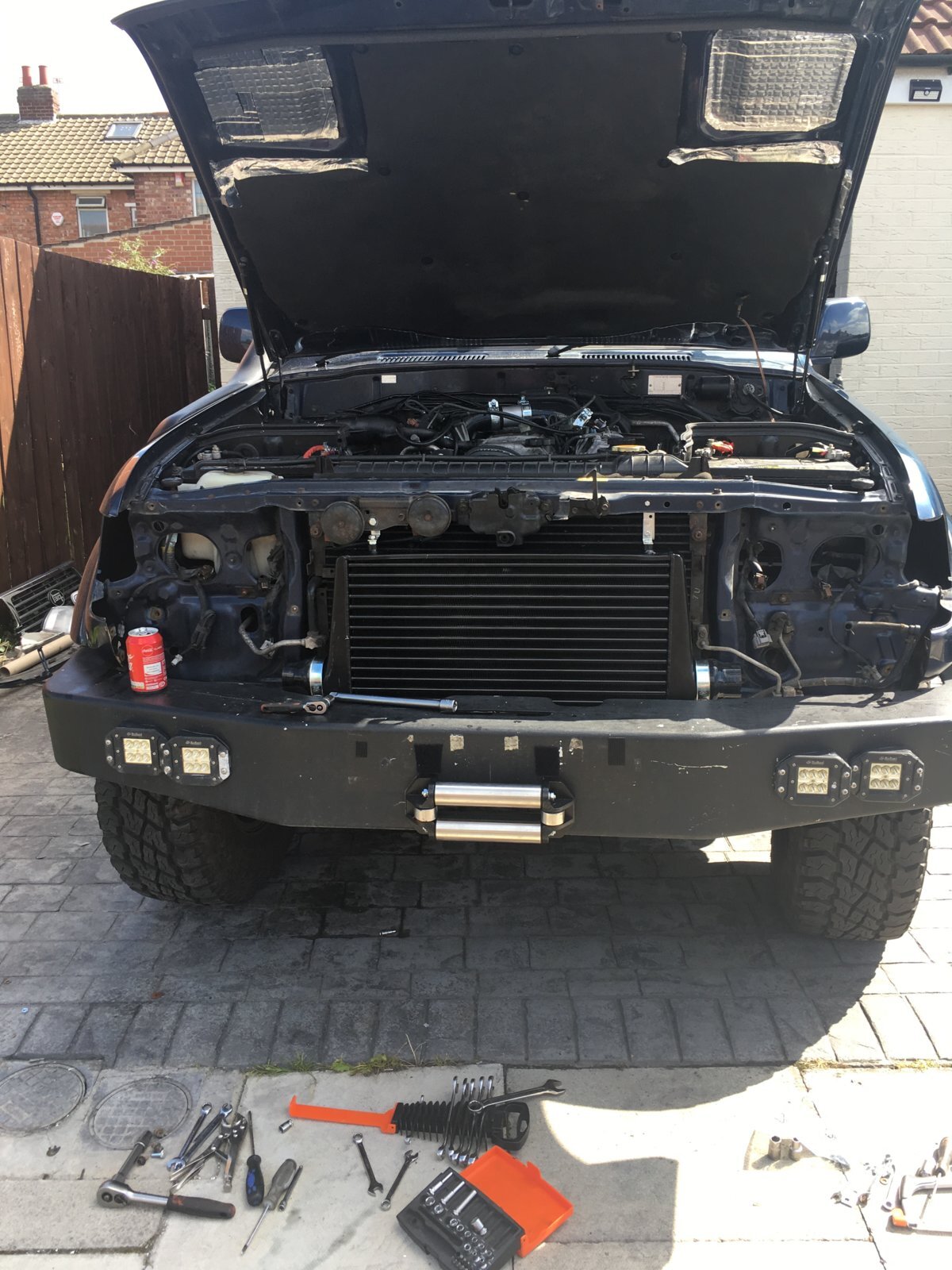 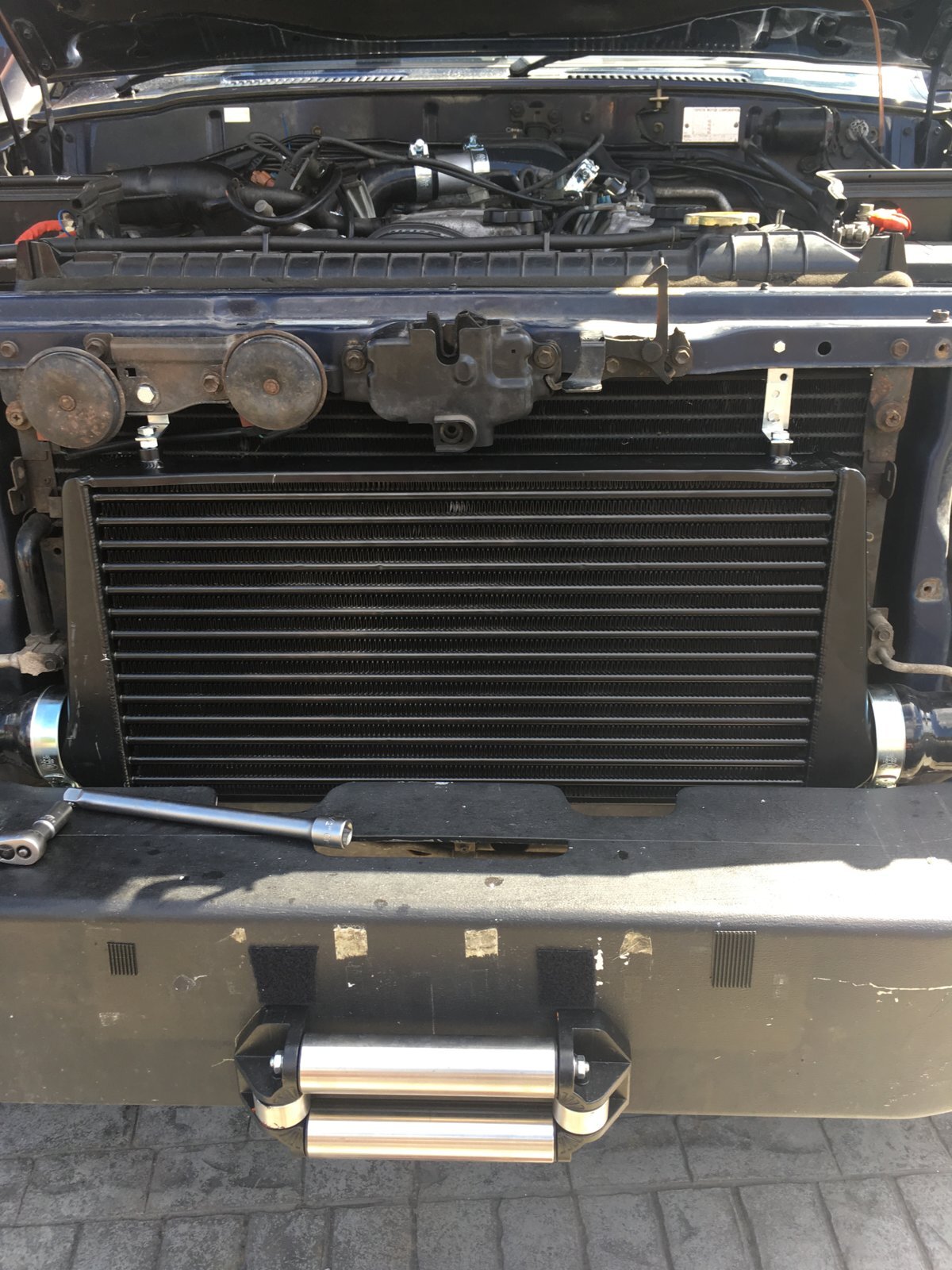 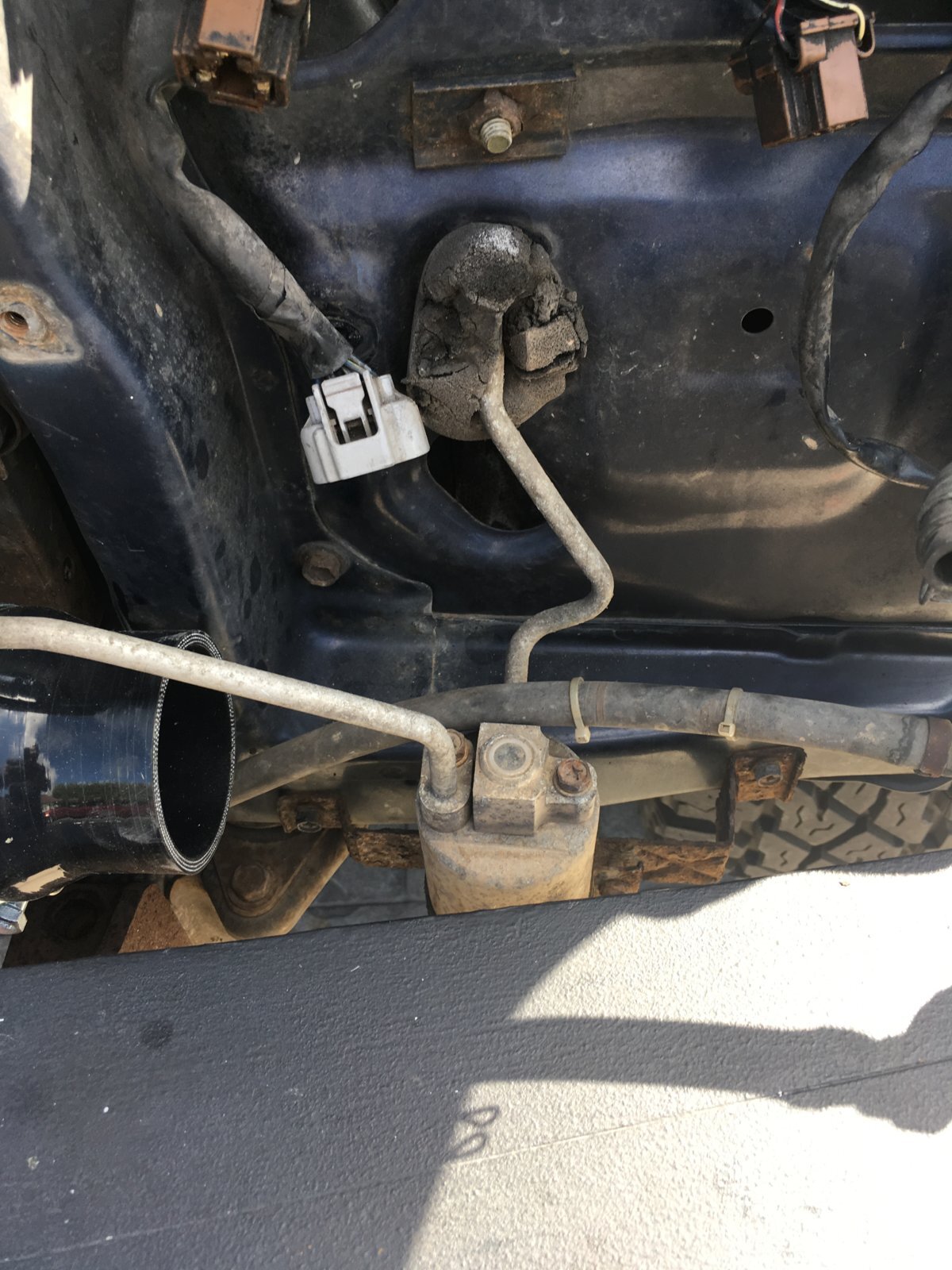 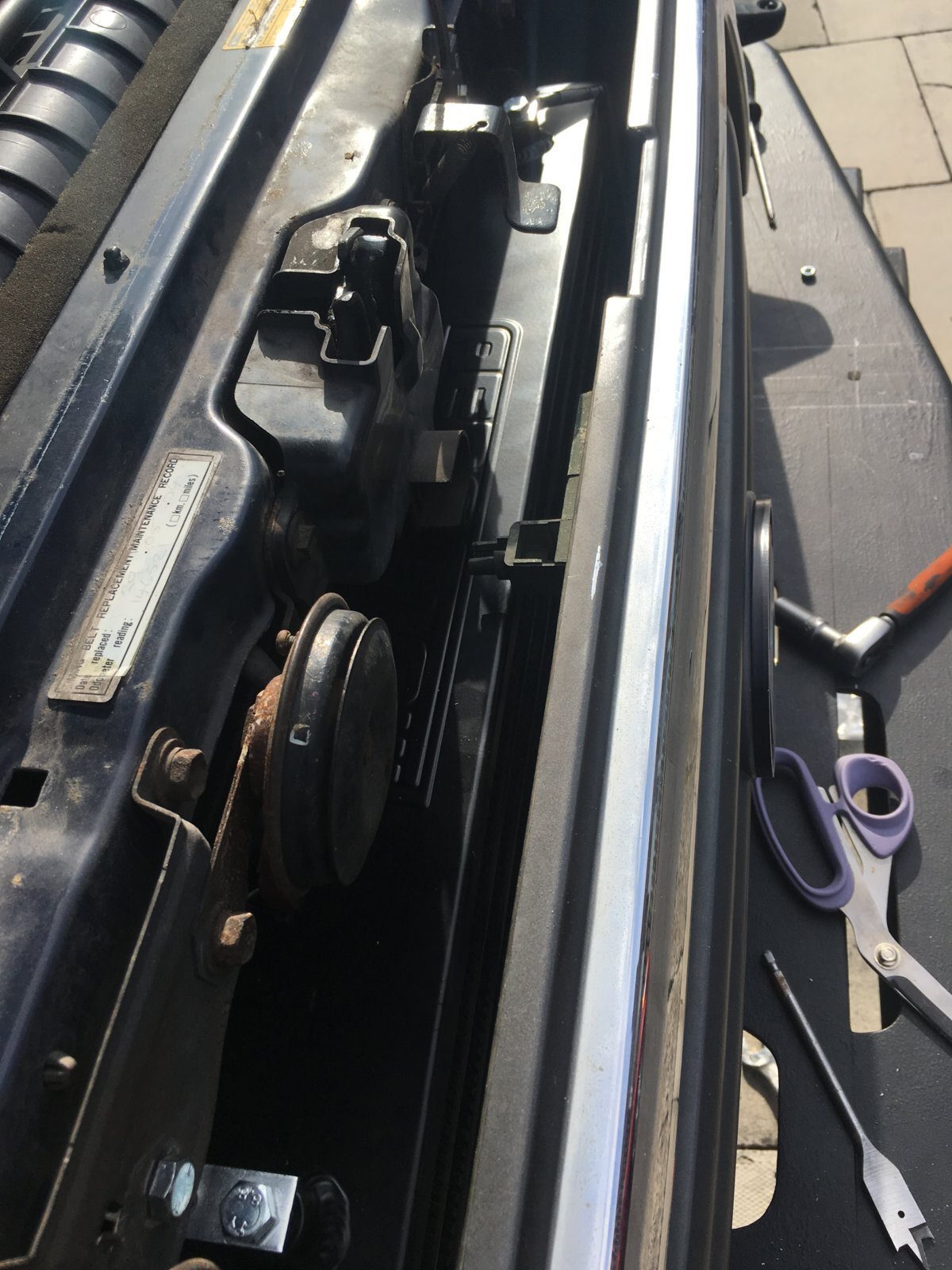 I normally loosen manifold nuts etc when its been running for a while. Everythings nice an hot. Makes a difference ime.
Don't like the adverts?  Click here to remove them

chapel gate said:
I normally loosen manifold nuts etc when its been running for a while. Everythings nice an hot. Makes a difference ime.
Click to expand...

I had a go at it cold and it began to turn out half a turn when hot, the hex on the top of the stud is effed so it'll bite to turn in but when turning out the socket or spanner comes up off the hex. Broke a halfords stud extractor on it too .... Refund on that tomorrow I think. Maybe going to weld a nut on the top and be done with it. It was annoying me so much I changed the oil in both boxes and ran the wires for the high level brake light just so I felt I'd done something.
Obviously it will come out, I'm just frustrated as I'm pushed for time. 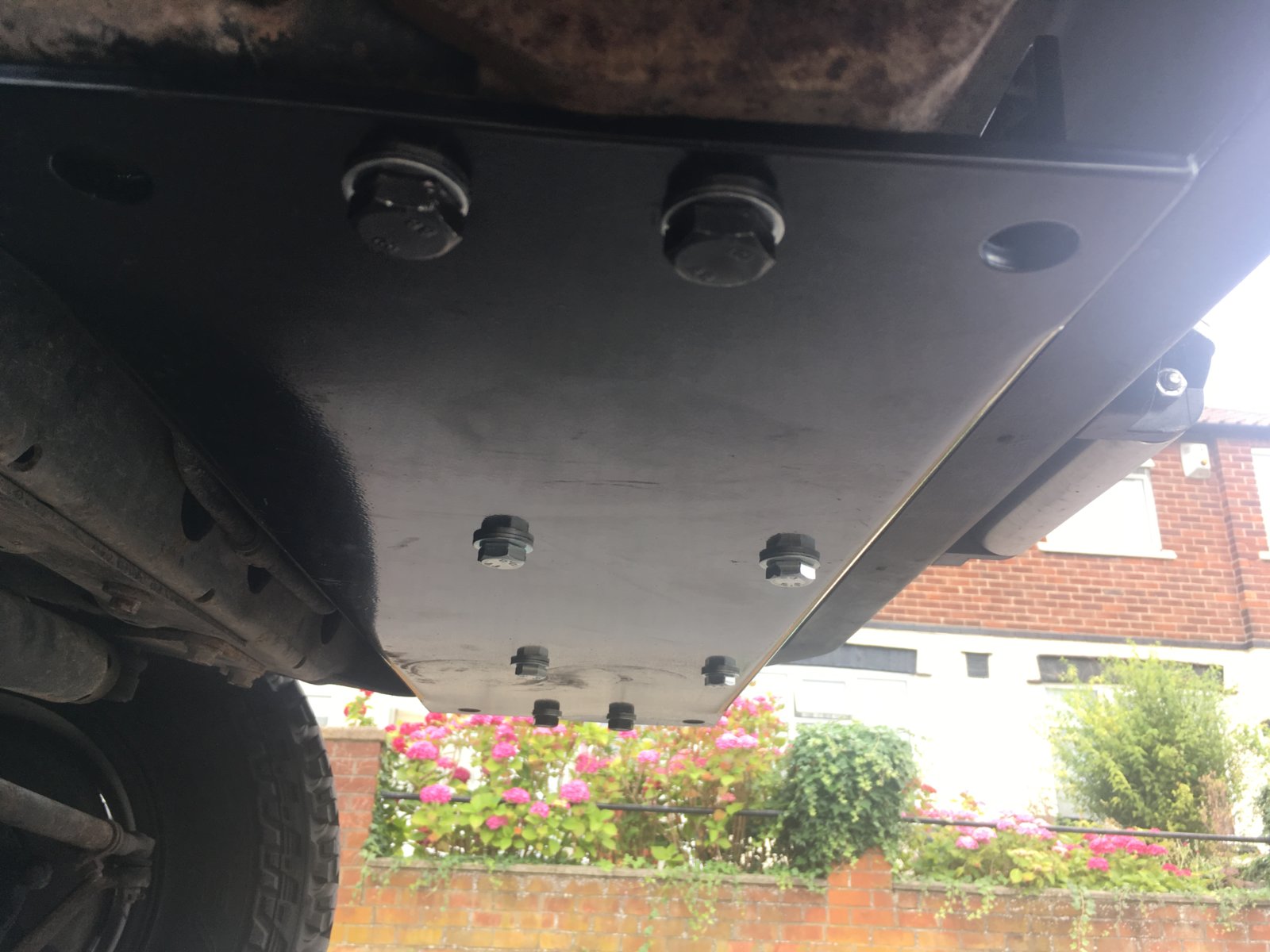 Well after a nightmare at Heathrow airport where all flights were cancelled and a 4hr drive in a Hyundai I10 to get home.
Finally got some work done.
Winch is in place (sans rope and not wired but in)
Glad I had extra holes put in as the selector won’t clear the intercooler as I had the plate made before I thought of a front mount intercooler.
I’ve managed to work out the bends and silicone needed to plumb the cooler just waiting for the postie.

Faced with a lack of things to do I lashed on the “30 second awning”
It took a little longer than that but I can see me getting used to it.
Needs shoving back an inch or two to get it taut but it’s a big thing.
Next trip down under and I’ll get the walls for it, I have to have the zips sewn in as they only added the walls option a month after I dragged the damn thing here from Australia.
Bloody Dromgos. Today was all about making templates for brackets, it looks like 5 minutes work but the reality was cutting and re cutting pieces of cardboard.
I have a template to mount the twin ARB compressor under the bonnet and to finally mount the pro vent oil separator. I can’t remeber how much the machined fittings were for it but they were a fair bit but they do look the part, seems a shame to put hoses over them. For want of a better place it’s going on a C section of aluminium coming off the 2 bolts of the brake servo. Hopefully the postie comes tomorrow with some silicone bits so I can get the intercooler piped in. Far from my best work and i just used aluminium from B&Q but it’s in there, if it doesn’t foul with the intercooler piping I’ll use this bracket as a template for something firmer.
I wish the postman would bloody hurry up ! Plumbed and the EGT probe is in too. Now the bit I don’t like ... wiring. EGT is in and functional, now I’m terrified of the accelerator pedal

. The left gauge that’s reading EEEE needs a map sensor for boost, searched everywhere for it and found it 5 minutes before it started to pour down with rain ... silicone bends still not err damn

WOW ! After almost 18 months of not driving a car and two years of not driving Brenda i finally got to England.
What a busy boy i was. Spent a week underneath the chassis, what a chore, started by degreasing the whole thing and then by hand with a wire brush i scrubbed and brushed both axles panhard rods the chassis and basically the whole shebang. no evidence of any corrosion other than surface mottling which produced a fine dust (which is worse for the eyes) After that it got a liberal application of some Aquasteel which I "acquired" cos we use it on rig legs. The axles have had a coat of Por15 and they look proper nice.
Then the AC drier was relocated behind the passenger headlight using parts i got off a scrapper in New Zealand ages ago., looks a lot neater without that thing dangling below the bumper line.
Next came the best bit... I finally tuned the fuel pump, I was going to connect the ACSD but that looked like a right f**k on and besides god knows where i put the blank and O ring.
So i pulled the short rod that let me back the idle off after i turned up the main fuel screw so the idle went up to 1600rpm, puff of smoke when i nail it but otherwise nice and clean.
Now comes the bit when i realised what a div i am, I'd been driving around worried about my EGT's cos they were topping 750c on long climbs. Turns out when i'd set the auber gauge up zero was not zero but in fact 86c. So i zeroed it and it still sometimes hits 750+ if i labour the engine but otherwise its sitting between 500-600c. My peak boost is still only 16psi so maybe ill up that but its made it a pleasure to drive.
Now I've got a long list of things to do next month:
Timing belt
POR 15 the whole chassis
hang one the swing outs on the onto the rear bar so i can remove the spare and fit the sub tank.
Modify the other swing out to hold a Hi lift Jack and composite waffle boards instead of a jerry can.
fit LED fog lights into the rear bumper as the original ones will be obscured by the spare on the bumper.
I've had some 20mm square section steel bent to suit the curve of the roof so that's to be welded up with square weld mesh into a dog guard. (Even though i prefer cats)
Finally after finding my cruiser mojo again I've got a drawer build mapped out with aluminum extrusion.
As they say .... Watch this space. Next time I promise there will be pictures.

Well I couldn’t resist as the drawer build begins in 2 wks or so. Two drawers for stuff and a slide out kitchen with gas hob with a slide out fridge above. Test assembly completed and it fits thank god. Much thanks to Michael Montgomery and Towpack for checking the dimensions.
I have been doing other stuff, the exhaust manifold with the broken EGR stud has finally been removed and a blank welded over it. The turbo now has a jacket and after searching everywhere I can’t find the water pump I brought from Qatar so have had to order another . Timing belt change in a few days

If you can track down adjustable joints, it opens up a whole world of possibilities, design and space efficiency wise. These are from Ullstein Concepts in Germany. They make in fill panels and even drawer runners.

Well I’m no carpenter and I made a few mistakes with the dowel jig. That’s the drawers done and while the glue sets I’ll try to remove the spare tire holder.
oh and can anyone guess what I’m doing next 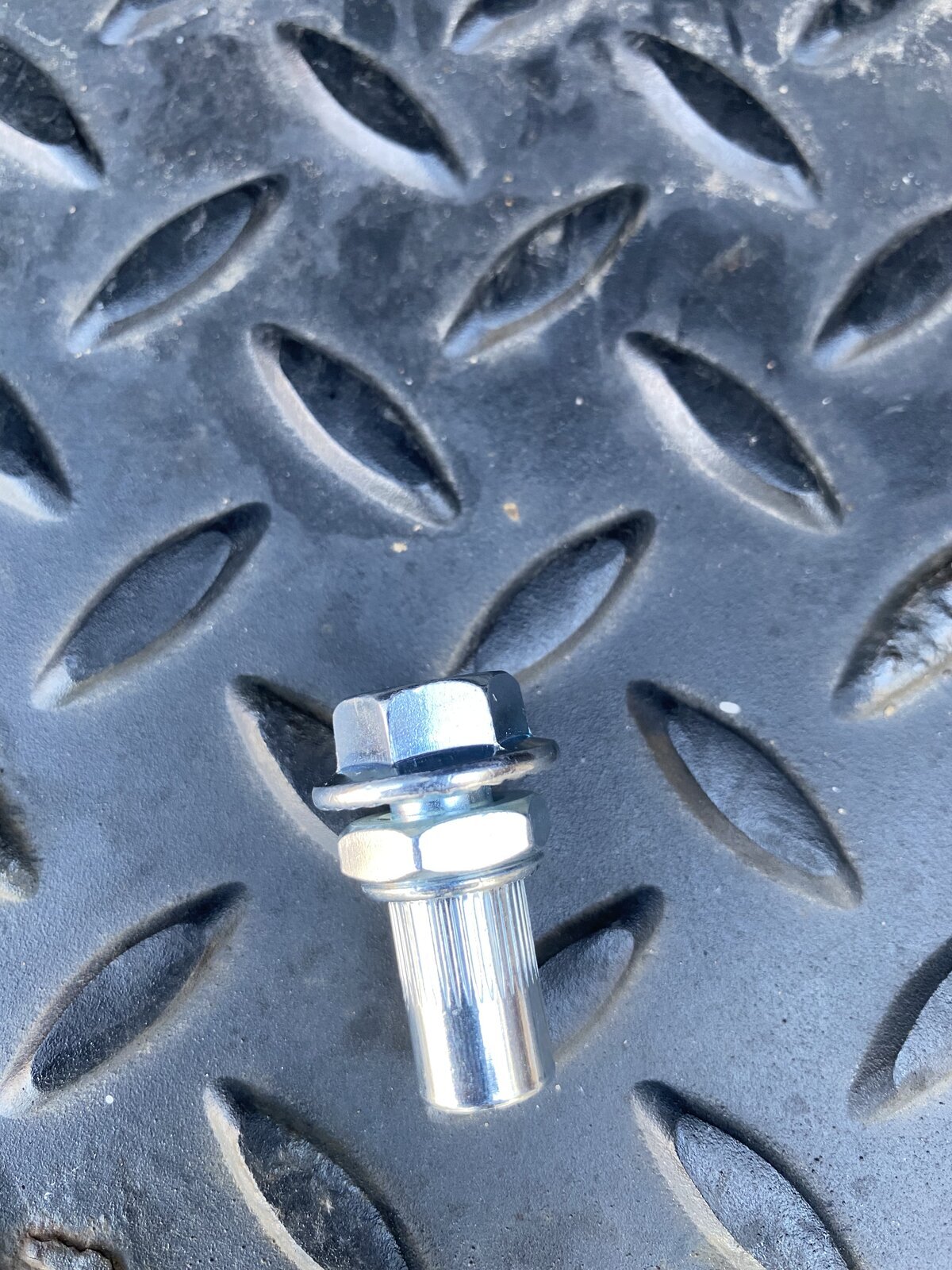 Thanks They look really useful. I really like extruded aluminium. I’m actually going to frame out my bus with the stuff to keep the framing light.
You must log in or register to reply here.